“He made a couple of difficult saves look comfortable.” 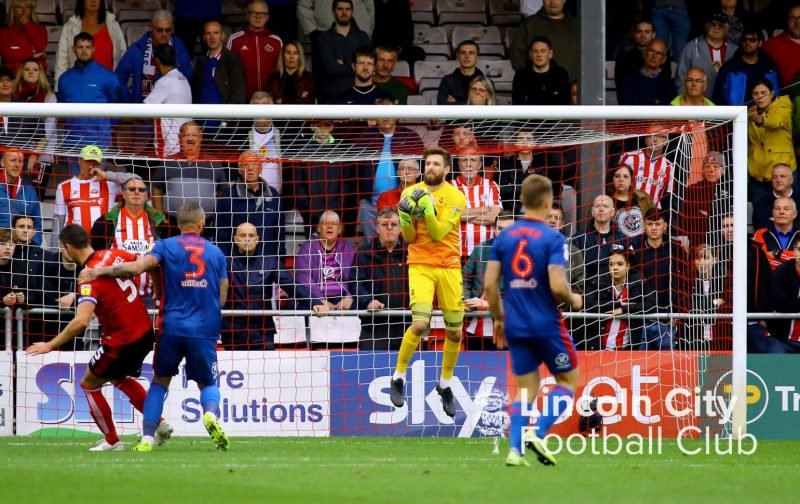 The Vital Lincoln City members’ voted for whom they believe was The Imps Man of The Match in their 0-0 draw at home against Shrewsbury Town in Sky Bet League One.

Views from Chimpimp: “In some games it easy to pick a man of the match.

The games against Sunderland, for example, had any number of candidates. The whole of the side played well and it was in the category of games you will remember for a long time.

The match against Shrewsbury fell into the category of games you had forgotten before you had got out of the ground. Shrewsbury came for a draw and were well equipped for that draw, especially against this Lincoln side.

Shrewsbury are a big physical side, Lincoln are not. There was only one way for Lincoln to play and that was a precise passing game navigating their way around the giants from Shropshire.

Unfortunately too often the passing was neither precise or quick enough to be effective. Many of the more creative players had an off day. A stalemate was the order of the day until Michael Appleton decided to chance his arm and stretch the game by introducing big John Akinde.

It almost worked as the ball found its way into the net twice but both times the offside flag denied Lincoln.

Lincoln’s defence had had a comfortable night and the truth is no one in the back four needed to excel to keep the cautious visitors at bay.

This all changed as Cian Bolger was caught out for once as the game reach its climax and his foul was deemed worthy of a red card.

All of a sudden the wind seemed to pick up, powering the visitors toward Josh Vickers goal. Lincoln were now under siege.

On a cold and windy night, it would have been easy to make a slip which would have seen Lincoln consigned to defeat but Josh Vickers’ handling remained sure and his concentration strong. He made a couple of difficult saves look comfortable and with a thin field this for me was enough to make Josh Vickers man of the match.”

sedgleyimp: “From an iFollow view I’ve gone for Vickers for his saves in the last ten minutes which ultimately gained us that point when down to 10 men.”

Riiiiik: “Agreed. He (Toffolo) was absolutely everywhere in the first half. Like a human tackling machine and got to balls from further away than some of our own players. He’s got a great engine.”

syimp: “I’ve gone for Shackell, only because I can’t remember him doing anything wrong. Not exactly a ringing endorsement, but MOTM was a bit hollow last night.

Vickers did OK, but all were shots from range, which you would expect him to save.

Toffolo did try to drive us forward, but everything died just outside the penalty area.

I feel sorry for Walker because he is regularly starved of anything like decent service.

It’s either aimless long balls or overhit through balls or inaccurate crosses. Add that to awful set-pieces and we weren’t a pretty sight.”

UnbelievableJeff: “Josh Vickers. A couple of great late saves to earn us a point. Sadly many others were AWOL with respect to this game. Shrewsbury made it very difficult for us to play and look like being the draw specialists of this year’s League One.
Overall Vickers’ performance meant that we came away with something.”

"He made a couple of difficult saves look comfortable.":https://t.co/5S9TP7BffU#ImpsAsOne #ProudToBeImps