Who Are The League One Managers? No.19: Brian Barry-Murphy (Rochdale) 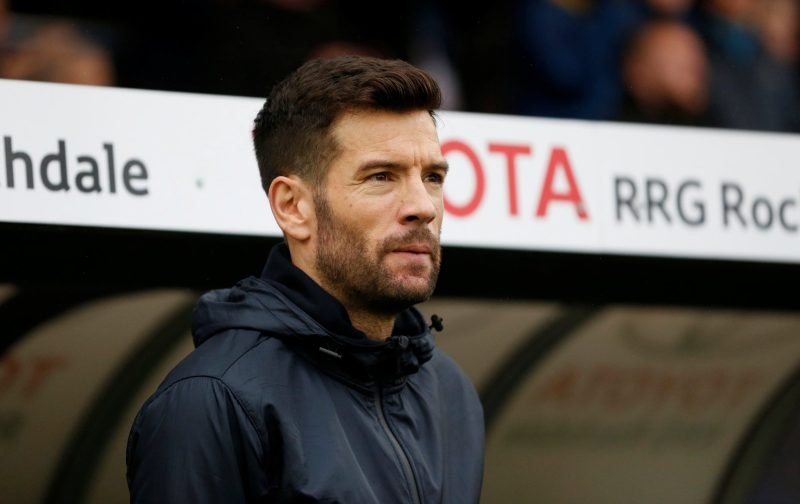 It would be fair to say that not many football supporters outside the north-west will know much about Brian Barry-Murphy. Far from being a complete novice in sports management, the likeable Irishman has a wealth of information at his fingertips: his father Jimmy Barry-Murphy is a GAA legend in Ireland through his career in both Gaelic football and hurling.

Coming from a long line of GAA stars, it was almost inevitable that Brian would continue the family tradition of becoming a professional sportsman. Indeed, his multi-talented father was also a soccer player with the now-defunct Cork Celtic in the late Sixties. In his formative years, Brian himself performed well in football and hurling, but there was also our old problem of following in the footsteps of a successful father. Brian himself speaks of being known as ‘the son of’, and that goes some way to explaining why he abandoned football and hurling in favour of soccer in his mid-teens. His opportunity came in 1995 when he signed for home town side Cork City. It was a career that almost never started: Cork went into receivership in January 1996 and only just survived following a change of ground. It is no surprise that Cork finished ninth that season, only one place above relegated Athlone.

There were better things ahead for the left-sided midfielder. Cork had a much better season in 1996-97, finishing fourth in the league and qualifying for the Intertoto Cup. Played during the summer of 1997, Cork drew three and lost one of their four games to exit at the group stages. Cork finished third in 1997-98, and on 16 May 1998, they won the FAI Cup, beating Shelbourne 1-0 in a replay, although Barry-Murphy did not appear in that game. That meant that Cork qualified for the last ever season of the Cup Winners’ Cup, although they went out in the qualifying round to CSKA Kiev. Whilst they were not lengthy European runs, they were all great experience for a teenager.

The 1998-99 season saw Cork finish runners-up, just three points behind champions St Patrick’s Athletic. It took Cork into the UEFA Cup for 1999-2000, but Barry-Murphy would not be there to take part. Having already had unsuccessful trials for Arsenal, Middlesbrough and Celtic, Brian received his first call-up by Republic of Ireland U21s for the President’s Cup tournament in Scotland during the summer of 1999. One of the 605 spectators watching him play against Northern Ireland U21 in Inverness on 2 June 1999 was Preston manager David Moyes, who invited him for a trial at Deepdale that lasted for three weeks. Having played against Everton in a pre-season friendly, Moyes told him he had made it through: it was his 21st birthday.

Barry-Murphy was given few opportunities in his first season as Preston coasted to the Second Division title under Moyes. He was sent off in his second game, a 4-1 win over Wrexham in the Football League Trophy on 7 December 1999, and made his solitary appearance in the league as a second-half substitute in the final game of the season at Bristol City. He also picked up a knee injury playing for Ireland that required an operation, but he featured in the side more regularly in the First Division in 2000-01 as Preston finished fourth and made the play-offs. Making most of his 18 appearances from the bench, he was an unused substitute as Preston went down 3-0 to neighbours Bolton in the final.

He was given even fewer opportunities in 2001-02 as Preston challenged for the play-offs again, and at the start of February 2002 he joined Third Division Southend United on loan. He appeared in eight games during his month at Roots Hall, only one of which was a win. The final game of his loan spell saw him score his first goal in England, a second-half consolation in a defeat at Orient. He was given no games at all at Preston in the first half of 2002-03 under new manager Craig Brown and joined Third Division leaders Hartlepool in October 2002 to get some game time. They were still top of the table by the time he returned to Preston at the end of December, and he made two starts for Preston in January before joining struggling First Division side Sheffield Wednesday on a permanent deal at the end of the month. He made just 28 appearances in his three-and-a-half years at Deepdale.

Wednesday were in the bottom two at the time Barry-Murphy joined them and new manager Chris Turner was trying desperately to revive the side. It was at this point that he was converted from midfield to left-back. His debut came in a 4-0 home defeat to promotion-chasing Wolves, and things did not pick up from there. Despite winning four of their last six games, Wednesday were relegated to the third tier for the first time since 1980. However, the penultimate game was a 7-2 away win at Burnley, and 2003-04 looked more promising than it would have done. On the positive side, Barry-Murphy was almost ever-present. On the negative side, Wednesday’s season collapsed spectacularly after a promising start, and they finished sixteenth, only three points clear of relegated Grimsby. It had been the second-worst season in the club’s history, and Barry-Murphy was one of fourteen players released in the close season.

Despite offers from Derry City and Rochdale, Barry-Murphy signed for Bury on 11 July 2004 as the Third Division morphed into League Two. He slotted straight into the team at Gigg Lane, although Bury had a poor season with a seventeenth-place finish. One small consolation came in the form of his best season in front of goal, scoring six times. The 2005-06 season was even worse as Bury fought relegation to the Conference. Safety was not confirmed until the final game, a convenient 2-2 draw with another relegation struggler Notts County. Bury struggled in 2006-07 too until a run of six successive wins in October took them out of the bottom two. All the same, they could still only finish fourth from bottom, albeit fourteen points clear of relegation. On 12 December 2006 he also appeared in the game that never was: having won an FA Cup replay 3-1 at Chester, Bury were thrown out of the competition for fielding an ineligible player.

Bury turned in another bottom-half finish in 2007-08, although there was some excitement as they reached the fourth round of the FA Cup before losing to two late goals at Championship side Southampton. Out of the blue, Bury started the 2008-09 season very well and sat in the top two in October. They went into the final game a point behind the top three, but their 1-0 win over Accrington was only enough to secure a play-off place after Exeter’s 1-0 win at Rotherham. The play-off semi-final against Shrewsbury was a tight affair and went to penalties: despite Barry-Murphy scoring with his, Bury lost 4-3. Bury were looking good for the play-offs again in 2009-10 until two draws and two defeats from their final four games saw them finish ninth. Despite receiving a further contract offer from Bury during the 2010 close season, Barry-Murphy needed a new challenge and he signed for neighbours Rochdale on a four-year contract on 16 June 2010. He made 245 appearances for Bury in six seasons, scoring thirteen of his fifteen career goals.

Rochdale had just been promoted to League One under manager Keith Hill and got off to a slow start, sitting in the bottom eight after twenty games. An eleven-match unbeaten run then took them to the edge of the play-off places. They were sixth with five games remaining, but three successive defeats ended their season. Hill departed for Barnsley in the summer, and Rochdale slumped to relegation in 2011-2 in bottom place. By this stage, Barry-Murphy was thirty-four and his playing career was winding down. He started his coaching badges during 2012 and played relatively few games from that point. He hardly made an appearance under John Coleman in 2012-13 and was only restored to the side when Keith Hill returned as manager in January 2013. Rochdale finished twelfth in that first season back in League Two, and during the close season of 2013, he was appointed first-team coach by Hill. Since then he has made only six more appearances for Rochdale, and we can now assume his playing career is over.

Rochdale stormed to promotion in Hill’s first full season back of 2013-14, finishing third. Dale also reached the fourth round of the FA Cup, beating Leeds 2-0 at Spotland along the way before going out to Barry-Murphy’s former club Sheffield Wednesday. They finished an impressive eighth in 2014-15 and reached the fourth round of the FA Cup again before losing to Stoke. There was a tenth-place finish in 2015-16 as Rochdale continued to punch above their weight, and another flirt with the play-offs in 2016-17 despite being bottom in September. There was another trip to the fourth round of the FA Cup, losing to neighbours Huddersfield. The 2017-18 season was one to remember, reaching the fifth round of the FA Cup before losing a replay 6-1 to Spurs at Wembley. The league also produced great drama, with Dale in the bottom four going into the final day. A 1-0 win over Charlton was enough to take the side above neighbours Oldham and to safety.

Dale flirted with relegation again in 2018-19, and Keith Hill was sacked on 4 March with the team third from bottom and five points from safety. Barry-Murphy was appointed caretaker and inspired an immediate turnaround with two wins and two draws from his first four games. On 3 April 2019, he was given the job permanently on a two-year contract, and three successive wins in April carried Rochdale to safety. The side struggled for most of the 2019-20 season, winning only ten league games before the coronavirus shutdown left them seven points clear of the relegation places. Excitement came in the cups, with a third-round replay defeat to Newcastle in the FA Cup and a defeat on penalties to Manchester United in the third round of the League Cup. The financial windfall from the 58,313 crowd at Old Trafford looked to have secured the club’s finances for the season, although it may prove to have been the saviour of the club during lockdown.

Brian Barry-Murphy has often spoken of the effect David Moyes had on him as a young player, and he also worked under lower-division specialist Keith Hill for a number of years. Quite how his own style will evolve remains to be seen, and Rochdale will always be a challenge on a strict budget. The club estimates a Covid loss of £625,000 to date, leading to the majority of senior players leaving during the summer. That presents Barry-Murphy with a mountain to climb, and the bookmakers are already forecasting relegation. Survival in League One this season would be some achievement against that background, and could well make his name as a manager to be reckoned with.