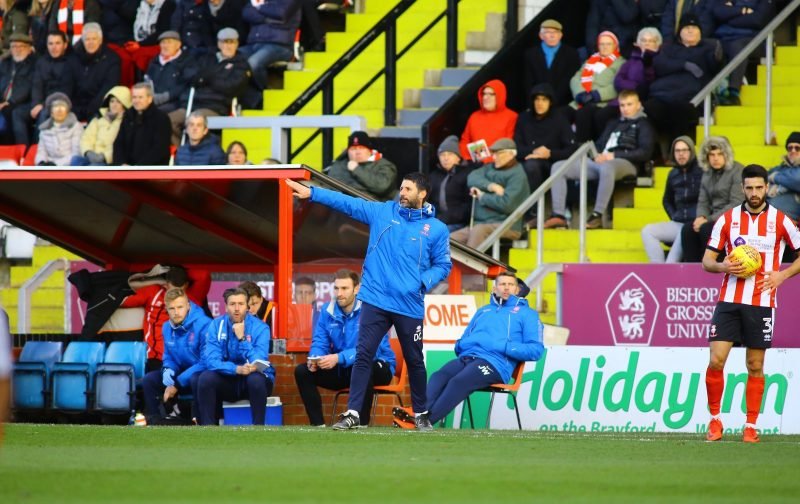 Danny Cowley talks to the press ahead of Saturday’s game against Colchester United in League Two.

DC described the next four games as very big and life-changing. They are against four of the best possession-based teams in the division and Imps probably have the toughest run-in of the playoff contenders but ‘we’ like playing possession based teams.

Wycombe: They came with a clear game plan and credited them for frustrating and slowing the game down. DC refused to criticise Wycombe as it was up to City to be good enough to beat them. Didn’t take the chances and weren’t good enough in the second half. Took it as a compliment that free-scoring good sides like Wycombe are coming to SB and setting up for a draw. If we can back the result up with a win against Colchester it will be a vital point gained. Michael Bostwick was deployed to front mark Akinfenwa as they had realised that Akinfenwa tends to give fouls away and vice versa if he is marked from behind.

Colchester: Knows them well from his Essex days. A good model for running a club. They compete hard with lots of SE and London clubs to pick up Academy players. Colchester aims for continuity and development of young players and staff from within. They have a nice mix of experience and youth; their players are technically gifted. Colchester will play the ball out from the back, move the ball quickly through the thirds as they have mobility, pace and players that can beat their man. They will have a counter-attacking threat. City will press effectively when they can and when not appropriate will maintain a good shape.

Scott Wharton: It has been an excellent move for all parties and he has progressed and developed, benefiting from exposure to first-team football. He has talent, likes to defend, rare left-footed CB commodity, good spring, keen to learn. It was very clear that DC was very impressed with Wharton and whilst the conversation hasn’t been had with Blackburn he would like him on loan again next season.

Miscellaneous: DC congratulated Accrington and John Coleman on their amazing achievement. The team needed to channel the frustration of the Wycombe game into positiveness going forward and that was something ‘they’ had spoken about. Danny Rowe is awaiting the results of a specialist looking at his scan but sounded very doubtful for Saturday. Due to the run of games, he was mindful of player management which would sometimes influence substitutions for example that he wouldn’t necessarily want to make. It was an excellent atmosphere on Tuesday night and DC encouraged the fans to repeat that and keep patient with the team during the game.