So Who Has Had The Toughest Start? December 2019 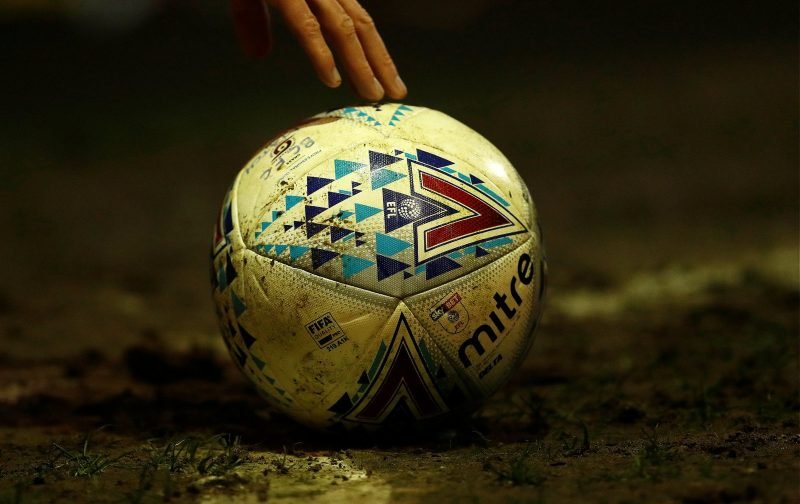 As we arrive at the midpoint of the season, it is time to crunch some numbers. Exactly how tough has the fixture list been for each League One club?

You know the method by now: take each team in turn and add up the current league position of every side they have played this season, divided by the number of games played. This calculation produces the average league position of each opponent, home and away.

For example, if you have played the teams in 6th and 10th at home, you have an average home opponent score of 8.00.

The lower the average score, the harder your fixtures have been. Therefore the teams at the top of the following three tables have had the toughest fixtures, those at the bottom the easiest.

• If your team is near the bottom of both the League One table and the OVERALL table below, start worrying – it means you are struggling despite having had an easy set of fixtures.
• Conversely, if your team is near the top of both, a good season may well be in the offing because you have done well from a challenging set of fixtures.
• However, if you are high in the League One table but low in these three tables, are you only doing well because your fixtures have been kind?
• And the opposite could be true: if you are in the lower reaches of League One but high in these tables, your league position should improve once the easier fixtures come along.

Theory suggests that each club should have played every other club once, either at home or away, but it isn’t quite like that. One caveat to consider must be the uneven nature of League One this season, which skews the following tables in the sense that some clubs have an unbalanced number of games played at home and away. For instance, Lincoln have played 13 away but just 9 at home at the time of writing. That would suggest a more successful second half of the season in the offing for such clubs due to the weight of home games remaining; and the opposite effect for clubs with a home bias. I have given the number of games played in the end column.

So, let’s split the numbers between home and away fixtures first.

As a reminder, the clubs at the top have had the hardest fixtures. 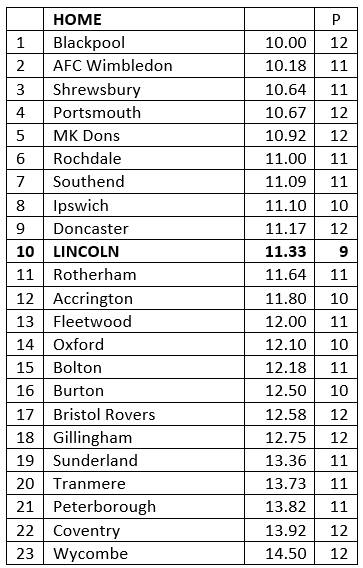 • Lincoln’s home fixtures have been harder than average.
• Of the teams in the top 6, Peterborough, Coventry and especially Wycombe have had it relatively easy at home.
• Wycombe have played only 4 of the top 12 at home – the second half of the season looks far more challenging for them.
• Blackpool and Portsmouth would appear to be well-placed in the league after a challenging home schedule; Portsmouth have played the top 6.
• Of the strugglers, AFC Wimbledon, Rochdale, MK Dons and Southend have had tough home fixtures; however, it already looks too late for the latter.
• Tranmere are fourth bottom of League One despite having had a kind set of home fixtures; they have only played 3 of the top 10 at home.
• Sunderland are also struggling despite a kind home schedule.

And now for the AWAYS; remember the teams at the top have had the hardest fixtures: 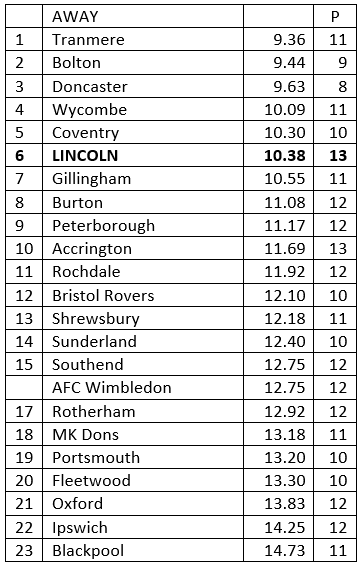 • So the Imps have had the sixth hardest away fixtures in League One in addition to having played 13 games, which is more than any other side except Accrington (also 13).
• Blackpool have had the most difficult set of home fixtures and the easiest away; they have played just 2 of the top 10 away.
• Ipswich have the joint best away record in League One, but have had the second easiest set of fixtures.
• Doncaster have only played 8 home games, but that includes 5 of the top 6.
• MK Dons have had a relatively comfortable away schedule, but are in the bottom three of the league table – that does not bode well.
• Tranmere may gain some comfort from the fact that they have had the toughest schedule away from home, but they only have 7 points in the bag from those. They have also had the fourth easiest set of home fixtures, indicating a tough winter ahead.
• Bolton have had a tough set of away fixtures for various reasons, but they already look doomed regardless. 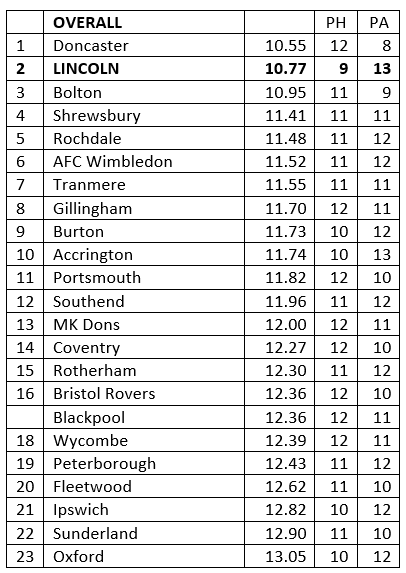 • Lincoln have had the second most difficult set of fixtures in League One; considering the managerial upheaval, 17th place at the midway stage is no mean achievement. To compound matters, they have only played 9 at home compared with 13 away: logic suggests they should climb away from the bottom as the season progresses.
• Interestingly, some of the high-flyers have had comfortable fixtures – Wycombe, Ipswich, Peterborough and Oxford are four of the top six in League One, and have had four of the six easiest sets of fixtures. Part of that is explained because they occupy the high league positions, but not all is.
• The worst place to be is near the bottom of the HOME and OVERALL tables: Wycombe, Peterborough and Sunderland are. Wycombe are facing a much harder second half of the season, while Peterborough have an uphill task if they are to finish in the top two. The bad news for Sunderland is that only one team has had easier fixtures overall, suggesting a late run to promotion is unlikely.
• It looks likely that the current bottom four – Tranmere, MK Dons, Southend and Bolton –will be the bottom four at the end of the season; but in which order?

None of this may actually amount to very much of course, as there is an unavoidable subjectivity to it. However, these numbers may explain why some teams have made better starts than others, and why some may be languishing. Who might be in a false position? More importantly, it gives us an idea of which sides may start to climb the table once they reach clearer waters in the fixture list; and perhaps an indication of who might slip in the opposite direction once their waters start to muddy.

So Who Has Had The Toughest Start? December 2019:https://t.co/WIIPlWE6yp#UTMP #TRFC #DRFC