Q&A With One Rochdale Supporter 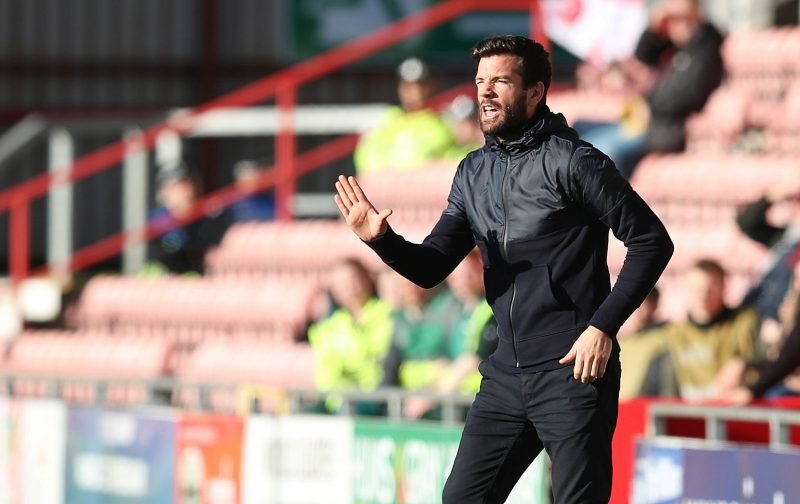 The last time The Imps hosted tomorrow’s opponents Rochdale was on Saturday 12th December 2009 in League Two, in front of a crowd of 3,293. Chris Herd put City ahead in the 23rd minute, but that is as good as it got for the hosts that day, with The Dale going in 2-1 ahead at half time thanks to goals from Chris O’Grady (36′) and Craig Dawson (45′). Joe Thompson completed the scoring in the 59th minute, making it 3-1 to the visitors.

Ahead of tomorrow’s match, we have done a Q&A with a Rochdale supporter, so thank you to David, who is an editor for Over The Bar (Twitter/YouTube), for answering our questions! Episode 19 of their League One Show can be found just below our Lincoln City v Rochdale Quiz at the bottom of the page! Every page view helps raise money for Lincoln City Football Club!

How long have you supported Rochdale?

I’ve supported Rochdale since I was about 5/6 years old, so about 25 years now.

At first, it was a case of my dad just taking me to a few games to experience live football and when I was 8/9 years old I got my first Dale kit and started going to games more regularly and I’ve been hooked ever since.

We finished 18th when the season was ended due to Covid. We weren’t too far away from the relegation zone, but I think we would have stayed up even if we played the full 46 game season. It was probably where I expected us to finish before the season started anyway.

Brian Barry-Murphy had a really positive start to his managerial career with Rochdale following the sacking of Keith Hill in 2019 and he had a really tough act to follow considering Hill is the greatest manager in our club’s history. We have not really kicked on since then despite some great showings in the cups against Man Utd and Newcastle. The league form has become a real cause for concern this season with only 1 home win all season and only 1 league win so far in 2021, the fan base has really started to turn on the manager. The style of play and a lack of a Plan B and ability to change things when games aren’t going our way is what is really annoying fans at present. I think the vast majority of the support now want to see the back of him but the club seem to be fully behind him so I think it is a case of getting behind the team the best we can and hope results turnaround.

Going into the season I’d have seen surviving another season in League One as a success. We lost Ian Henderson and Callum Camps during the summer which were big losses to the team and many people outside of the club thought we were certain for a bottom 4 finish. Personally, I felt we signed adequate replacements most notably Stephen Humphrys and Alex Newby to fill those gaps and felt like we could push on from a bottom 4 battle but that hasn’t really materialised so far.

Kwadwo Baah is one of our most exciting players at the moment. He’s a product of our academy and has been linked with a lot of big clubs. He is a really pacey winger and has a decent shot on him, but he is still very young and learning as he goes about the senior game.

Stephen Humphrys is another one to watch. He’s struggled a bit recently, but I think that’s due to lack of service whilst we have been on this bad run of form. But prior to this run he was scoring frequently and was scoring some really good goals in the process. He’s been trying to make stuff happen himself in recent weeks as the midfield aren’t getting the ball into good positions for him but hopefully, he can get back on the scoresheet soon.

I think the current top 4 (Hull, Peterborough, Lincoln, Sunderland) will all be in the top 6 at the end of the season. The other 2 spots are anybody’s guess really seeing as Doncaster and Portsmouth have been on awful form lately. I think Doncaster’s games in hand could be crucial and just about to keep them in there. I’m going to go with Ipswich for that final spot. The appointment of Paul Cook is a great choice, and he will really push them on.

Sadly, I think Rochdale will be one of the four. I think the other 3 spots will be filled by Wimbledon, Swindon and Northampton. If any of those four were to escape it will be at the expense of Wigan. I think Bristol Rovers will be fine under Barton and Burton have been nothing short of incredible under Hasselbaink.

I am really happy to see Lincoln amongst the promotion chasers. It just goes to show you don’t need to be huge spenders to be successful at this level and I think a lot of neutrals will want to see you get a top 2 spot ahead of the big hitters in the league. The journey you guys have been on the last 5 years or so has been incredible and it is a club that seems to be going from strength to strength. I doubt many of your fans will have predicted you would be in such a good position heading into the final quarter of the season.

I am trying to retain some optimism from the fact your home form isn’t that great to say your 3rd in the league, but with the way we are playing I don’t see us getting anything from the game and you’ll get a 2-0 win.

We played 36 consecutive seasons in the fourth tier between 1974 and 2010 which is the longest run any team has had in the bottom division. Not a fact to be proud of but something that could come up in a pub quiz.

I would love to have Lewis Montsma in our defence. He looked brilliant against us when you played us earlier in the season and he seems to have popped up quite a few times in front of goal so far.

What are your proudest and most embarrassing moments as a Rochdale supporter?

It’s quite hard to pick one singular moment which I’m most proud of. In terms of the league, it’s a toss-up between getting to the Play-Off Final at Wembley and getting promoted back in 2010. Even though we lost the Play-Off final it was incredible just to see Dale play at Wembley. The first promotion back in 2010 was a surreal feeling as we had a couple of near-misses in the 2 previous seasons and in the season we went up, it felt like we were doing all we could to blow it as we got nearer the end of the season. We’ve had plenty of cup moments to be proud of. Sadly, I wasn’t able to get to the League Cup game against Man Utd last season but taking a fairly strong United side to penalties at Old Trafford was a great effort. For me, in terms of the cup, nothing tops our FA Cup performance at home to Spurs. The stadium was sold out and the atmosphere was brilliant, we thought we were out when Harry Kane scored a penalty near the end of the game but with nearly the last kick of the game, we got a deserved equaliser to get a replay at Wembley. I don’t think I could speak for a few days after that game.

In terms of embarrassing moments, I think the most stound out moment was an FA Cup defeat at home to FC United. It was televised and we were huge favourites going into the game, but once the 1st whistle went it felt like a shock was on the cards. The away end was full, they were in fine voice and they made a great atmosphere. Ultimately, they snatched a win at the death to send us out of the cup and its still arguably their biggest win still to this day.

I’d say, Jimmy Keohane. He’s not a world-beater by any stretch of the imagination but he will play wherever he is asked. Since joining the club he’s played across the entire backline and in central midfield. He’s predominantly been used as a full back on each side this season, but he always puts in 110% effort regardless of the job he is asked to do.

We do have a supporter’s trust. They predominantly act as a link between the board and the supporters as there was a long period where the communication from the club was abysmal. It’s still not perfect but the trust do have a lot more engagement with the club than in the past. They also organise a lot of charity nights to raise much-needed funds for club initiatives and also plan the Exiles Day where Dale fans who live further afield are given a dedicated game and are treated to a day of hospitality.

Which was your favourite match involving Rochdale?

I think our Play-Off Semi-Final 2nd leg at home to Darlington back in 2008 will always stand out for me. We trailed 2-1 after the 1st leg and managed to turn it around at home in the 2nd leg and won on penalties. It’s one of the more dramatic games I’ve attended. It had red cards, penalties, multiples clearances off the line, shots hitting the woodwork. It was a really good tie. I don’t think I’ve ever been as nervous at a game as I was during that penalty shootout and luckily, we got the win to take us to Wembley.

Which was your least favourite match involving Rochdale?

Any time we lost to Bury or Oldham. Any derby loss will always be a tough result to take.

Do you have a Former Players Association at Rochdale?

I’ll be honest not that I am aware of.

What is the best thing about Rochdale?

If I’m honest there’s nothing much to really celebrate about the town. The council have invested heavily in the town centre but due to Covid, the investment is yet to really reap the rewards. Hopefully, once we see the back of Covid we can see the town start to flourish and I can give you a better answer if we play each other again in the near future.

How much did you enjoy that first promotion since dinosaurs walked the earth?

At one point I think there was more chance of dinosaurs coming back than Rochdale getting promoted. Especially when we blew it on the play-offs in the 2 seasons leading to the promotion. Even when we did get promoted, we didn’t make easy work of it. It was great to get rid of the “Rochdale division” tag that League Two was affectionately known as at the time. It is a season I’ll always look back on fondly as we had a great squad and played some great football under Keith Hill.