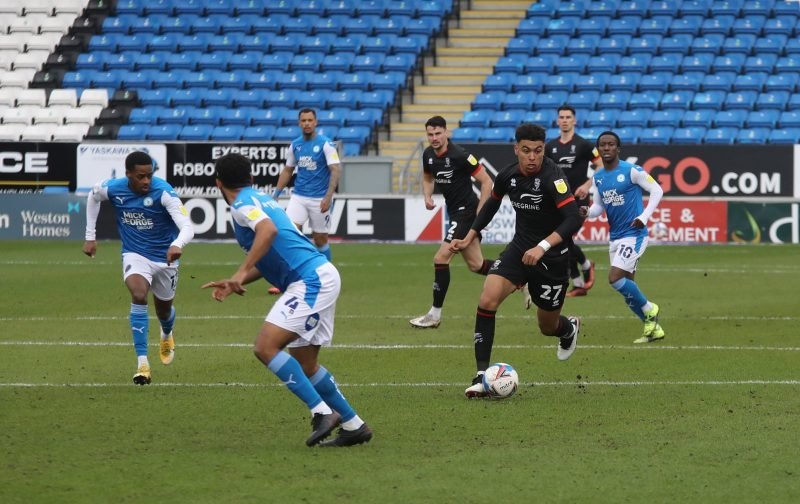 Views from Brendan Bradley following Saturday’s 3-3 draw away at Peterborough United in League One: “On the plus side, our deserved win would only have delayed the inevitable Peterborough promotion and just caused more upset and anxiety on Tuesday or, even worse, next weekend.

I think Peterborough are a really excellent side going forward and you could say they missed good chances that would have changed the game anyway, like the one in the first minute of the second half.

I don’t blame ours for missing chances either, it happens.

But….. to be pegged back like that with a fortunate deflection and then the 2nd worst penalty award I have ever seen in the last minute of injury time is a bit annoying.

I hope they can use the justifiable anger from that to carry them through whatever is left of this season.

On a personal note – I had the choice of two games today but I watched Lincoln instead of Elche v Atletico Madrid which was a 3.15 k.o. I watched the last 15 minutes of the latter and it was 0-1 going into injury time when Elche got a penalty… from which they hit the post and it ended 0-1. Great ******* end to the afternoon all round.

On the other hand, I really enjoyed the game.”

You can discuss what has been said in this article HERE, as well as many other topics on our 100% Imps forum! We have also published a Lincoln City v Peterborough United Quiz, which can be found just below. Every page view helps raise money for Lincoln City Football Club!

Stevie_imp: “I don’t know what to say after that. What a terrible decision that hopefully those that review that penalty decision will remember.

Meanwhile, lets take stock. We are capable of beating the top two promoted. We are in form going into the playoffs. But most of all we have a very good squad, manager and the best fans in this division.

Thanks for your company today it’s been special. Let’s go again for the playoffs

My head is melting a bit. Hope you are all well.”

Luke Imp: “Great achievement to have secured the PO’s with two to spare, even more so given that not long ago it looked like we’d struggle to hang in there.

Performance have steadily improved, results have improved, Grant, Bridcutt, and Hopper all back with Walsh and Jackson probably not too far away. If there’s ever a time to get your strongest XI back…”

Rasenimp: “I am getting worried we’re going to be the team who gets every bloody team promoted.

I guess a few comments aside from the terrible decision – you can see why we need Bridcutt in there, him going off was big, and Tom Hopper is a good player but **** me if we could find someone like him but a bit more lethal we’d have been out of sight in the autos.