Michael Appleton: “One thing for sure they’re going to be highly motivated.” 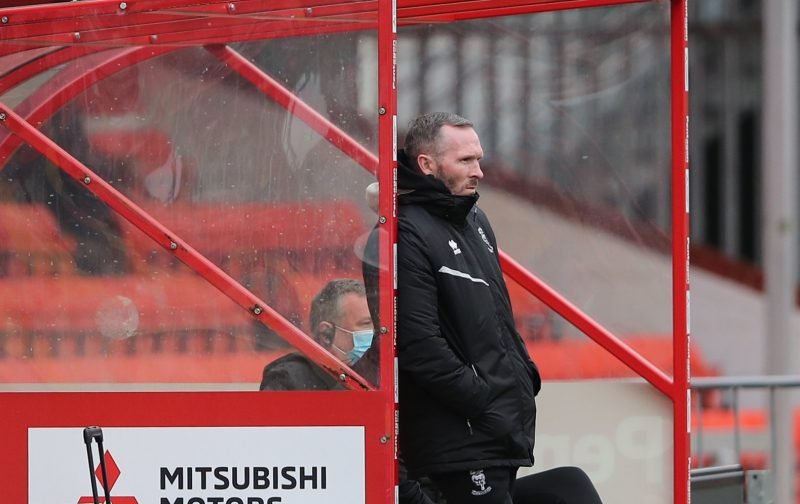 Michael Appleton reflected on a Covid disrupted week ahead of the Peterborough game on Saturday.

You can discuss what Michael Appleton said earlier today HERE, as well as many other topics on our 100% Imps forum! We have also published a Lincoln City v Peterborough United Quiz, which can be found just below the summary. Every page view helps raise money for Lincoln City Football Club!

Covid: MA and his wife are feeling much better after a tough time dealing with the illness and concerns about their baby son possibly catching the virus.

It was difficult to have any meaningful input with the players initially but as the symptoms lessened MA was able to adapt using technology to ensure he was able to have some influence. MA did acknowledge the circumstances were less than ideal though, “It’s probably the less prepared I’ve ever been for a game of football because of circumstances so let’s see how it goes”.

The good news is that MA has returned to the club, has taken training and will be in the dugout against Peterborough.

Sadly several players (including key ones) and staff will not be able to partake due to positive virus tests. Naturally, the names of those concerned are under embargo. The game has not been in doubt but if one or two more had been affected then it may have been. “The staff and everybody at the football club have done incredibly well to stop it getting worse than it has”.

The introduction of twice-weekly virus tests will be a great help going forward. On one level it will bring a degree of comfort and confidence to people in the camp.

Transfer Window: Imps are in a slightly different position to last year in that any players joining the club will have more emphasis placed on effecting the starting 11 as opposed to filling out the squad.

On Morgan Rogers, the player has been in MA’s plans for a while with positive conversations taking place involving Man City. for quite a few months. It was only a matter of time before a Man. City player joined us. “It helped us; the game we had against them in The Papa John’s Trophy. I think they were impressed; the way we played the way we set up”.

MA revealed that Morgan had quite a few offers from other L1 clubs so is delighted that he chose to join Lincoln.

Peterborough: “One thing for sure they’re going to be highly motivated”. MA explained that their players having had such a long lay off will be refreshed, a bit like the first game of the season, therefore resultingly will want to start the game really well. That is something MA is mindful and aware of.

Peterborough possess a lot of quality, notably in the forward areas.

All said though, it would naturally be a good thing if The Imps could secure a victory towards the halfway mark of the season and open up a points gap between a side that is targeting at least the playoffs and probably automatic promotion this year.

Michael Appleton: "One thing for sure they're going to be highly motivated."https://t.co/QwcCIWvBJV#ImpsAsOne #ProudToBeImps #PUFC pic.twitter.com/6QJToZW4Zc