Michael Appleton: “It’s one thing I want to do before I leave the football club; make sure we do get promoted.” 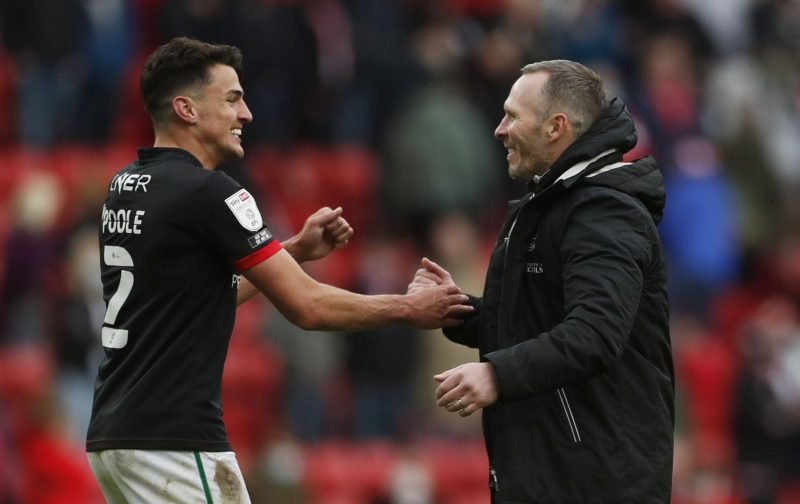 You can discuss what Michael Appleton said earlier today HERE, as well as many other topics on our 100% Imps forum! We have also published a Lincoln City v Blackpool Quiz, which can be found just below the summary. Every page view helps raise money for Lincoln City Football Club!

News From The Camp: Everybody is in good spirits as you would expect. “Everyone’s looking forward to the game, to the point we just want to get on with it now”.

It’s the culmination of 11 months and one week’s blood, sweat, and tears and shows how far ‘we’ have come.

Adam Jackson and James Jones have not recovered from injury in time and will not feature. Yet again there are question marks hanging over the full fitness of all the other three center-halves but MA isn’t interested in mind games. He is hoping and expecting that all three will be fit enough and available. Joe Walsh has barely trained to give him the best chance of making it, and he will start the match if he is able to.

MA does not expect Brennan Johnson to be distracted by the anticipated announcement of the Welsh squad to play at the Euro’s.

Preparation: MA normally announces his team to the players the day before a match. He will sleep on the timing as he doesn’t want to heap pressure on the players.

MA will be highlighting the importance of playing the game, rather than the occasion. That may well be a cliche but there is a lot of truth to that. Players will need to ensure they respect Blackpool and limit their opportunities as much as possible. The Imps will also have to turn up and start far better than the last match! “….get the players to focus on the 95, 98 minutes, rather than what is going on around them”.

He will be leaning heavily on the first-half experience at Sunderland. That experience for such a young group of players could not have been better preparation – to suffer in the first half as badly as they did, to experience the pressure of an opponent pressing the life out of them in somebody else’s stadium with fans getting on their backs; it couldn’t be fresher in their minds.

The Occasion: MA is open-minded as to how the style of the game will play out. He is hopeful of an open game. “For me, it would be great because it would be an opportunity again to showcase the standard of football being played in League One at the moment”.

MA pointed out it would be realistic to temper that ideal, with the reality of what is at stake. As a consequence, the game may end up being a bit less free or open and there could be a few more tackles flying in than normal. If that is the case it then becomes dependant on the players keeping their concentration levels high.

The game is massive for Lincoln City Football Club and everybody associated with it. On the possibility of promotion, MA had this to say. “It’s one thing I want to do before I leave the football club; make sure we do get promoted…..to do it with a group of players we’ve got…..how young they are and inexperienced; would be a massive, massive occasion”.

Michael Appleton: "It's one thing I want to do before I leave the football club; make sure we do get promoted."https://t.co/zUr7YEJlm2#ImpsAsOne #ProudToBeImps #UTMP