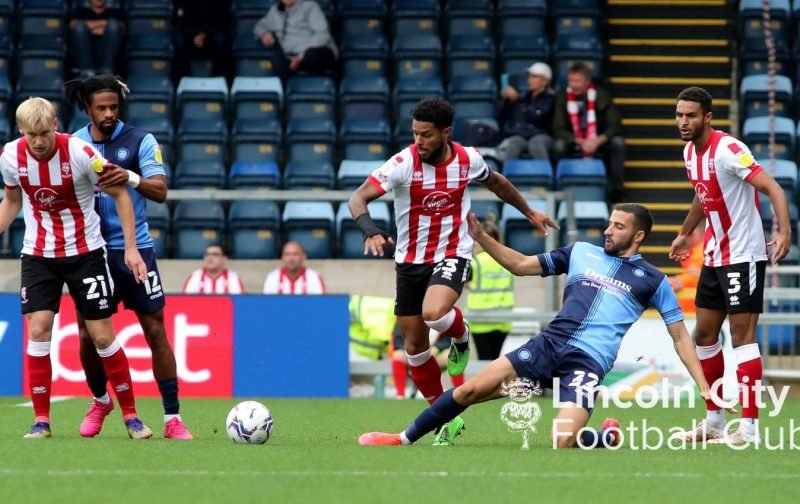 Views from Luke Imp following yesterday’s 1-0 defeat away at Wycombe Wanderers in League One: “Very poor today. A team who are set up to pass the ball and couldn’t against a side who couldn’t pass the ball and had no intention of doing so. The result was a stop-start game and turnovers galore.

Too many hospital balls both in terms of direction and speed, little pace in the side, everyone coming short and no one stretching the play, Jackson had a bit of a mare bar two blocks, Edun’s passing was all over the shop, Bridcutt’s passing was way off, the less said about Hakeem the better – that was a performance of Bohan Dixon’s level in terms of application i.e. cruised through the game and Hopper tried but ultimately got little support.

Conceding such a bad early goal doesn’t help. Rather ironic that Bridcutt lost the ball in midfield after his comments in the Echo earlier in the week, Melbourne was nowhere near Vokes and it looked on first viewing like Griffiths could have come for it? That gave Wycombe the chance to spend the last 87 minutes, or 111 minutes as it turned out, to slow the game down and take an age over everything.

All that said, we did create two very good chances that we should have put away.

Lacking in three or four positions at the minute, but some of those are down to injuries rather than needing more players although more pace in attacking areas is required in my opinion.”

PerthImp: “Much better second half, but we do not look like a team at the moment. Far too many balls cut out by the opposition instead of quick short incisive passing with the ball through causing problems. It does show how much we miss Johnson, but it’s more than that. The midfield was great last year, but at the moment the likes of McGrandles and Sorensen just don’t look fit enough or quick enough. We looked better second half with Bishop and Fiorini when they put a foot on the ball and tried to play shorter passes. I think it’ll be a similar outcome next week, although Oxford are less physical and try to play football. I think next week we’ll see Jackson as the left-sided CB and Eyoma as the right-sided one. Oh well, onwards and upwards. UTI 👍👏.”

Brendan Bradley: “The goalkeeper is very much learning his trade, we can only hope he learns quickly and it all clicks.

We have too many players out and a lot of those who are available don’t look fit either, so this has been made into a very hard start. It doesn’t help that we’ve played two of the most direct and physical teams in the league away from home already.

Being spoiled, and not meaning to be critical of individuals, I don’t like the combination of Jackson and Melbourne at the back. It’s enforced, but it’s not good and it makes us much weaker in it.”

Merthyr Imp: “Just got home about half an hour ago due to train cancellations and haven’t looked at anyone else’s comments yet – only read the match report and looked at the highlights.

We seemed to be on something like our best form in the first half against Bolton (from what I saw of it) but there was little of that in evidence today.

From 25 yards away I blamed Melbourne for the goal, but looking at the highlights it looked as if he was leaving Griffiths to deal with the cross.

We couldn’t put the ball in the net once again from the opportunities which we did still create despite for most of the match not playing well.

Hopper was badly missed in the second half.

Big disappointments today were Melbourne (whether the goal was his fault or not), McGrandles, Adelakun (especially him), and Nlundulu.”