Who Are The League One Managers? No.5: Graham Coughlan (Bristol Rovers) 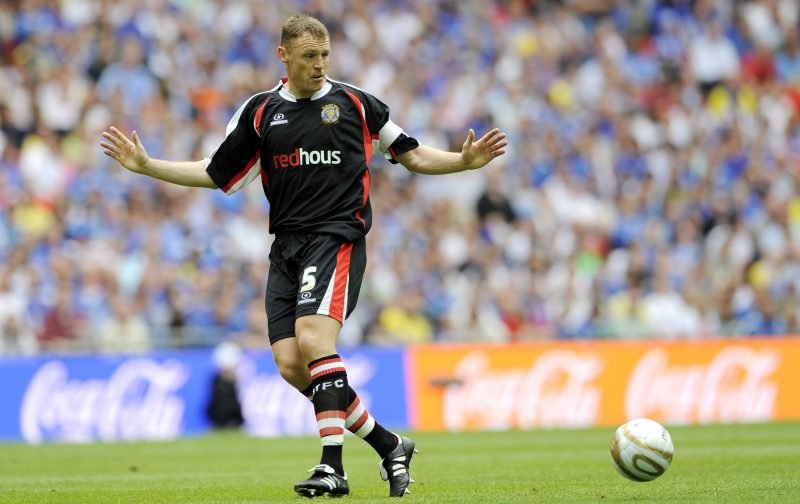 Graham Coughlan is one of several managers in League One who are about to enter their first full season in football management. Although inexperienced in that capacity, Coughlan began his coaching career during his playing days and has now been active for the best part of a decade. Currently holding the UEFA ‘B’ and ‘A’ Licences, he also has a Diploma in Football Management from the University of Warwick. The theory is certainly there, but now he has to put all of it into practice.

Back at the beginning, centre back Graham Coughlan began his career with the youth team of renowned Dublin club Cherry Orchard as a teenager, but by his own admission, he was not the most dedicated of players. It was a career that almost didn’t happen. His determination to enjoy his life interfered with a trial for Ireland U15s; regrettably, he never again had the chance to play for his country at any level. The senior players at Cherry Orchard brought the young defender back into line, but he thought his chance of a career in football had gone by the age of 20. Then he got a surprise call to join League of Ireland First Division side Bray Wanderers for a small fee, and he never looked back. With Bray on their way to promotion to the Premier Division, he was signed by reigning Premier League champions Blackburn Rovers on 14 October 1995 for a fee of £100,000.

Unfortunately, he was given no opportunities to impress at the big-spending Lancashire club, and he took the option to join First Division strugglers Swindon Town on a month’s loan on 25 March 1997. It did not go well: Swindon failed to score during his three appearances, conceding seven goals. He returned to Blackburn and reserve team football for a couple more seasons until another loan opportunity arose: this time he joined Scottish Second Division club Livingston on 30 March 1999. His stay at Almondvale was a happy experience as Coughlan helped Livingston to seal the title with four wins and two draws from his six appearances. After four years at Blackburn without a game, it suited all parties to make the move to Scotland permanent at the end of May.

With his career now underway in earnest at the age of 24, Coughlan enjoyed a successful season as Livingston finished fourth in the First Division, also being named Player of the Season. Owned by ambitious former Celtic director Dominic Keane, Livingston were determined to take their place among the elite and manager Ray Stewart was surprisingly sacked in March 2000. Former manager Jim Leishman returned to the hot seat and led his team to the First Division title the following season by a seven-point margin. Coughlan made 21 league appearances despite a period of injury and also featured in the final of the Scottish Challenge Cup which was lost on penalties to Airdrie. They also reached the semi-final of the Scottish Cup, although Coughlan missed the 3-0 semi-final defeat to Hibernian. For the second successive year, he was named Player of the Season. Livingston had reached the SPL for the first time in their history, but Coughlan would not be there to take part. At the end of his contract in May 2001, he elected to join the club where he was to make his name: Plymouth Argyle.

Plymouth had finished in mid-table the previous season and manager Paul Sturrock made a large number of changes to the squad including signing Coughlan and several others from north of the border. After failing to win any of their first three games, Plymouth embarked on an amazing nineteen-game run of fourteen wins and five draws that carried them to the top of the Third Division table. From there they never looked back, amassing a club record 102 points on their way to the title. Incredibly, Coughlan finished top scorer with eleven goals, an extraordinary statistic for a defender in a title-winning team. To cap another great season, he was named in the PFA Division Three Team of the Year and also picked up Plymouth’s Player of the Season title. It was his second successive league title and third successive Player of the Season award.

Plymouth enjoyed a good first season in the Second Division in 2002-03, finishing in eighth place but a massive sixteen points behind the playoffs. The second season was even better as Argyle swept to the title by a seven-point margin, an ever greater achievement considering they lost manager Sturrock to Southampton at the beginning of March. There was a new club record in December and January with seven consecutive clean sheets. Coughlan again contributed an impressive eight goals in a free-scoring team, and was named Second Division Player of the Season as well as being named in the PFA Team of the Season. It was also his third league title in four seasons. In 2004 he published an entertaining book called To Be A Pilgrim in which he detailed life as a professional footballer in one of football’s outposts.

Plymouth won three and drew the other of their first four games in the Championship in 2004-05, but it was mainly a struggle after that. Although never in real danger of relegation, they finished in a disappointing seventeenth place, only three points above the relegation zone. In the summer of 2005 Coughlan decided to join his former manager Paul Sturrock at newly promoted Sheffield Wednesday, and four successful seasons were over. In June 2019 he was voted Plymouth Argyle’s greatest ever centre back by supporters.

Operating under some severe financial restrictions, Wednesday took a long time to settle in the Championship in 2005-06. They won just four of their first twenty-six games and sat inside the bottom two for much of that time. Five wins from their last eight games ensured survival, secured with a 2-0 win at Brighton in April. Coughlan was named Player of the Season, his fifth such accolade in seven seasons. Wednesday also started slowly the following season too, and Sturrock was sacked in October 2006 after a 4-0 defeat at Colchester had left them one point off the bottom. New manager Brian Laws slowly changed the club’s fortunes, but the turnaround did not include Coughlan for very long. Unfortunately, he had lost his place in the side following a facial injury and then due to the tragic death of his brother, and appeared very rarely thereafter. On 22 March 2007 he joined Championship rivals Burnley on loan but played only two games for them. Having been told by Laws that he could leave, Coughlan had a brief trial with Leeds before signing for League Two Rotherham on 13 July on a two-year deal.

Just relegated from League One and later hampered by a points deduction for entering administration, Rotherham actually had little hope of a swift return. The Millers had a good first half of the season and a 1-0 win at Chester at the end of January took them into second place. Unfortunately, a depressing run of nine points from fifteen games saw the side plummet down the table and out of contention. Ironically, they ended the run with four successive wins to finish in ninth place. At the end of the season, Coughlan was sold to League Two strugglers Shrewsbury on 30 July 2008 with a year of his contract remaining.

In addition to being named captain, his role at Shrewsbury was also to include working with the reserves and the youth side, his first involvement with coaching. Shrewsbury had a good first half of 2008-09 season, sitting in second place in December. During that spell, Coughlan appeared in two 7-0 wins in the space of four weeks, one of them away from home. A 2-1 win at Dagenham & Redbridge on the final day secured a playoff spot for the Shrews, and they went all the way to Wembley with a 4-3 win on penalties against Bury. Unfortunately, a 90th-minute goal by Gillingham’s Simeon Jackson ended the promotion dream, and Shrewsbury were left in League Two for another season. Ironically, Gillingham were one of the teams beaten 7-0 during the regular season. Much was expected in 2009-10, but Shrewsbury’s season never really got going and they finished in mid-table. At almost 36, Coughlan was released at the end of his contract.

The next stop came in August 2010 at Southend United where old friend Paul Sturrock was manager. Signing a one-year deal, the role was both as player and reserve team manager. Expecting to do more coaching than playing, Coughlan ended up making 36 appearances overall as Southend finished in mid-table. Indeed, Coughlan performed so well that he was given a new two-year contract on 14 June 2011. However, he was to make very few appearances from then on, racking up just five more in 2011-12 and one solitary game in October 2012. The 2011-12 season was a successful one for Southend, reaching the play-off semi-finals before losing 3-2 to Crewe on aggregate. Sturrock departed towards the end of the 2012-13 season, which saw the side finish in mid-table again. Southend did reach the final of the Football League Trophy, but it was again Crewe who ended the run with a 2-0 win.

On 20 June 2013 Coughlan signed a contract as first-team coach under new manager Phil Brown, and his playing career was over at the age of 38. In total, he made 501 appearances, scoring a creditable 42 goals.

With Coughlan now coaching only, Southend qualified for the League Two play-offs in 2013-14 with a fifth-place finish. Burton Albion ended the promotion push with a 3-2 aggregate win in the semi-final. There was also a run to the fourth round of the FA Cup where Southend went out to Premier League Hull. Southend made the playoffs in 2014-15 with another fifth-place finish, missing out on automatic promotion by a point, dropping out of the top three with a final day defeat at Morecambe. A 4-2 aggregate win over Stevenage in the semi-final was followed by a 7-6 win on penalties over Wycombe, and Southend were back in League One.

Southend consolidated in 2015-16 with a mid-table finish, but 2016-17 saw them miss out on a League One play-off place by a single point. Another promotion bid was anticipated in 2017-18, but a mid-season run of seven defeats from eight games saw Brown and Coughlan dismissed on 17 January 2018.

After six months out of the game which he spent with his family back in Sheffield, Coughlan was appointed defensive coach at League One Bristol Rovers on 3 July 2018. The role was destined to be a short term one. With Rovers in the bottom four, manager Darrell Clarke resigned on 13 December 2018 after a 4-0 home defeat by Doncaster, and Coughlan was asked to take temporary charge. He lost his first game as a manager at Sunderland but won the next three to take Rovers out of the relegation zone. The board was impressed and appointed Coughlan to the position on a permanent basis on 6 January 2019. Rovers climbed slowly up the table to finish fifteenth, although only four points clear of relegation.

And so Graham Coughlan enters his first full season as an unknown quantity. If his record as a player and coach is anything to go by, he will do a sound job. But with Rovers losing £3 million a year, financial matters may also have a part to play in that.

Who Are The League One Managers? No.5: Graham Coughlan (@Official_BRFC):https://t.co/s81QsFlwii#BristolRovers #Bristol #SkyBetLeagueOne