“He possesses this mighty infectious enthusiasm about the club.” 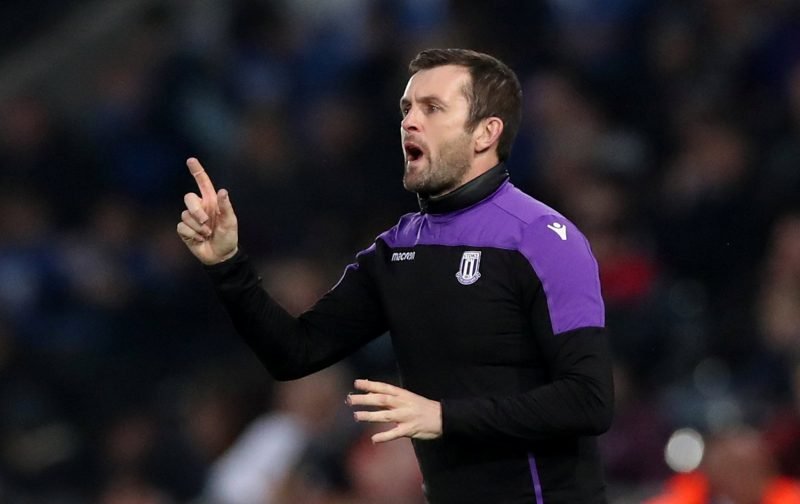 The Imps host Championship Club Stoke City tonight in a pre-season friendly. Kick-off is at 19:45. Imps fans can purchase tickets on the gate for the Lower Co-op Stand this evening.

The last time the two sides met (according to 11v11) in a competitive match was on 3rd April 1999 in Division Two in front of a crowd of 12,845. I’ve never seen us play Stoke City, but I would love to see us play them away from home. The atmosphere at times at the Bet365 Stadium is fantastic, so just imagine what it would sound like with an away end full of Lincoln City supporters.

Anyway, time for the Q&As. Thank you to Stoke City supporters Josh and Phil for answering our questions. The answers have been published on two pages. You can get to the second set of answers by clicking “click here for the next set of answers!” or by clicking HERE.

First up, the answers provided by Josh:

How long have you supported Stoke City?

I’ve supported them since 2004, which was my first match at 8 years old. Gripped since then.

I like him. He possesses this mighty infectious enthusiasm about the club, and that is something that the club has severely lacked for the past 3 years or so now. It’s great to see.

I’ve already committed myself to a 1st place finish on The Oatcake! I think just think this season we should be looking at Top 6 minimum, with the players at our disposal.

Nick Powell and Sam Vokes. On the assumption Nick Powell stays fit, he could be one of the best in the league in his position. As for Vokes, he is looking trimmer than last season, and has already netted in pre-season. Valuable experience as well.

You romped home last season, and only 7 losses too. The form dropped slightly in the last 5 but even so, you were very impressive. I personally had MK Dons to win it so it was a surprise. Certainly built upon the 7th Place you had in 17-18. Unlike us with Pulis, Cowley seems to be happy with also playing out from the back in addition to going long. Impressive stuff for League 2.

I’ll go for 2-1 to Stoke. I think you’ll get a goal. Dependant on as well, what lineup we deploy. I think Jones is looking to get the final starting XI finalised now.

We once almost went on a tour of Poland for pre-season in 1939, then decided it might be a bad idea because of obvious reasons.

We need a good left-back, so Harry Toffolo would be a shout.

What are your proudest and most embarrassing moments as a Stoke City Supporter?

Proudest – It was watching our team walk out on the fabled Wembley pitch against Man City. Unfortunately, I was stuck at home that day so this was on the television, (with a cracking BBQ mind).

Embarrassing – Please select any of the 4-0 defeats we suffered under Mark Hughes. To see the team give up the way they did in them matches was pathetic.

That’s a tough one. I’d say Ince. A few supporters don’t like him, but played in the correct position and he’s a Championship winner. Something a bit Shaqiri-esque in that respect.

We’ve got both our Supporters Council and the Community Trust. The SC are very important in bringing up fan raised issues to the chief exec Tony Scholes. Unfortunately, he is as much use as a chocolate fireguard but it’s nice to have it there at least. The Community Trust are fantastic in charity work, working with local and national charities, and helping to run soccer schools and overseas programmes. One was worked with Kenwyne Jones in Trinidad and Tobago a few days ago.

Which was your favourite match involving Stoke City?

Either the 5-0 v Bolton or the 6-1 v Liverpool. Both are incredible. The 5-0 edges it because of the scenario it was involved in.

Which was your least favourite match involving Stoke City?

Stoke 1 – Palace 2. Confirming the relegation felt like a huge kick in the teeth.

Do you have a Former Players Association at Stoke City?

I believe we have the SCOBA – Stoke City Old Boys Association.

What’s the best thing about Stoke?

Are your stripes better than ours?

Well, put it this way, if Errea ever made a shirt for us that looks like your home one we’d all be livid!

Other than Matt Rhead who is your most famous supporter?

Busta Rhymes, of course, he wore a Stoke top once you know!

The hardest question you’ve asked! I’ll leave Delilah to answer that one.

From your recent experiences in the Premier League, is it better to be a small fish in a sea of sharks, or the shark in a smaller sea?

That small fish in a big pond feeling is great when you topple the likes of Man City, and Arsenal especially. Proving the doubters wrong is wonderful.

Alan Hudson, was he all that and have you had anyone better since?

I’ve never really got to see many clips of Hudson play, but I can assure you that the common consensus is that he was an absolute joy to watch. Many of us thought that Bojan could have been the next one, but alas…

What is it like living in the shadow of those up the road in Burslem. Joking aside is there much in the way of a rivalry between the two clubs?

They wish we were in their shadow, more chance of plaiting fog than that happening! It’s not a rivalry anymore. We play in completely different leagues, and we have done for so long now that it all feels a bit pointless. The U23’s game last year with them was heated but that was down to some knobhead fans.

Micky Bloor. One that got away?

Reading on him, it doesn’t seem like it! Though he sounds like he was decent for you at least.

"He possesses this mighty infectious enthusiasm about the club.":https://t.co/DRzBMcW3GR#ImpsAsOne #SCFC #StokeCity