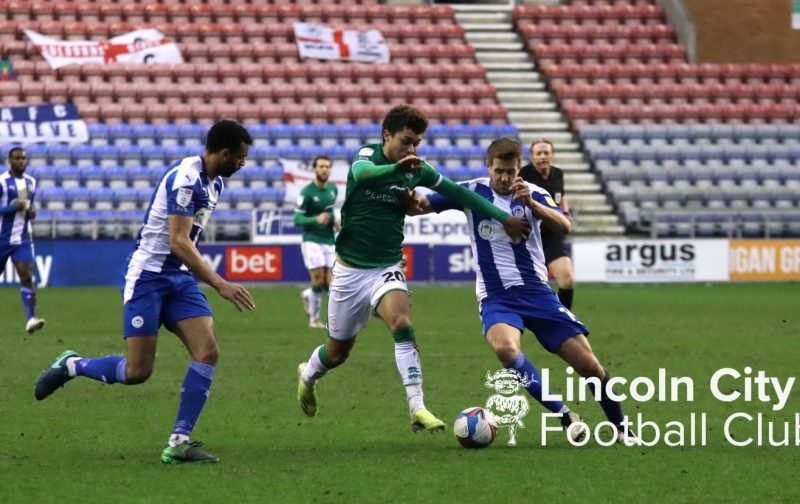 Views from hulloutpost following Saturday’s 2-1 win away at Wigan Athletic in League One: “I’m not sure how….but we won. They seemed stronger and up for it. It couldn’t have been a coincidence they picked up so many loose balls and seemed stronger in the tackle. They adapted better to the wind and pitch and I’m not sure where our defenders inside the box were or who they were marking on too many occasions in that second half. I’m also glad we won’t be seeing Callum Lang again……but we won.

The difference was one move and moment of quality from two key players in the second half, and that makes up for losing at home to Donny for me. No-one expected it to be easy and nor should it be at this level. Well done for sticking in there Imps and grinding out the win.”

You can discuss what has been said in this article HERE, as well as many other topics on our 100% Imps forum! We have also published a Lincoln City v Wigan Athletic Quiz, which can be found just below. Every page view helps raise money for Lincoln City Football Club!

PerthImp: “Lucky, lucky, lucky. A well below par performance, again, but we did enough, just about, to take the 3 points. As they say, to win championships, you have to win when you don’t play well. A good job they were so poor in front of goal. On to Swindon on Tuesday 🤞”

Croozey: “Well, we ground out a win there. But… we were very lucky. Wigan raised their game against the team at the top. We were below par. A couple of good performances for Lincoln- Tom Hopper played ever so well, and reward with a great winning goal. Poole had a good game, Jackson was excellent and Rogers kept going and got stuck in.”

JT_LCFC: “Just got to grind them out, at times. We almost needed to prove to ourselves that we are capable of difficult challenges. Wigan sounded a completely different animal to Tuesday, and have a chance of staying up with performances like that.

Looking at the results it turned out to be a massive 3 points. Let’s hope we can capitalise on that Tuesday night at home.”