Who Are The League One Managers? Summary 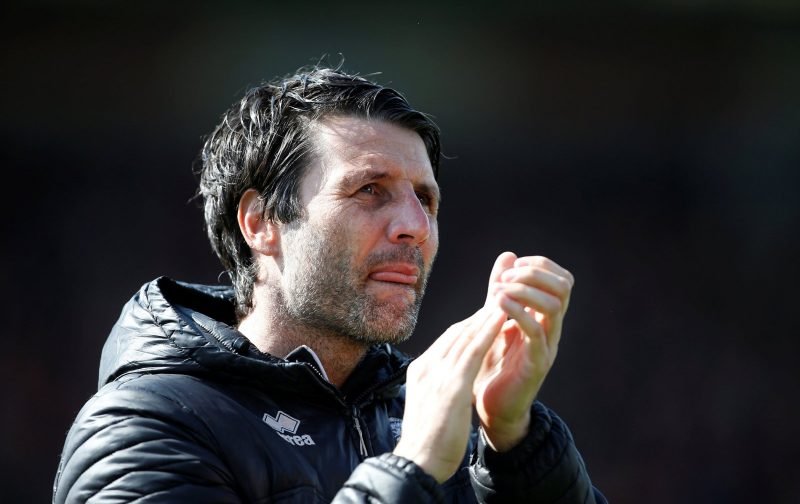 Now we have taken a look at each of our managers individually, it is worth comparing their records to identify who the winners might be next season – and which ones may become contestants in the great sack race as the new season gets underway. Nothing is certain in football of course, and a good few are setting out on the managerial ladder in earnest; whilst that makes some of these records unreliable, there is no doubt that success over an extended period is indicative of a true winner. As ever, there will be surprises.

An average points per game figure is given for each manager. In order to translate that into something more tangible, the table below shows how many points that figure equates to over the course of a 46-game season. Although other factors obviously come into play, it gives an indication of how likely that manager is to be involved in a relegation struggle (under 1.20 PPG), a play-off challenge (above 1.50 PPG needed) or an automatic promotion challenge (above 1.70 PPG needed).

Here are the scores on the doors: 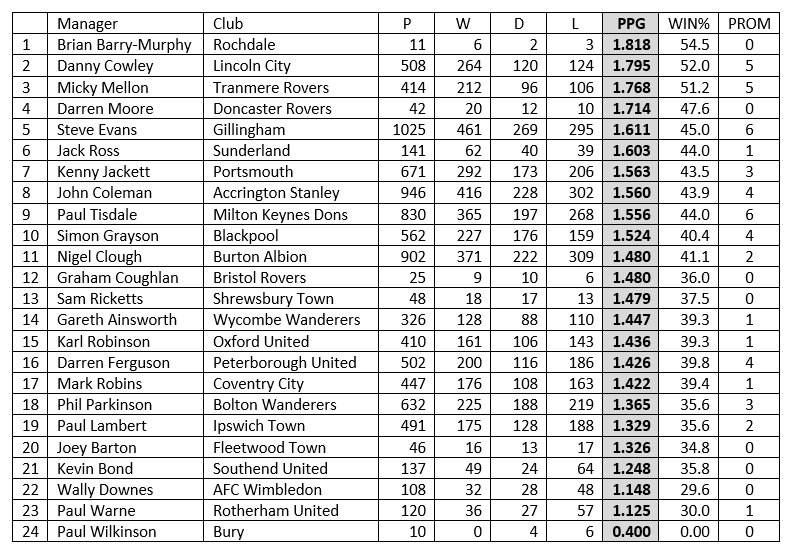 * Sixteen of the twenty-four managers have a previous promotion to their name; they have forty-nine promotions between them. The numbers in League Two last season were nine and twenty-seven respectively, which indicates a significant increase in experience and competence.

* Fifteen of the sixteen promotion-winning managers have won promotion in the Football League (the exception being Jack Ross, who won his in Scotland). Nine of them – Clough, Evans, Ferguson, Grayson, Jackett, Lambert, Parkinson, Robinson and Warne – have won promotion from League One previously.

* There is a great contrast between the experienced and inexperienced. Nine managers have managed more than 500 games, but six have yet to reach 100.

* Almost every manager who has managed for at least 100 games has a promotion; the sole exception is Kevin Bond (137 games, although only 89 have been in the Football League).

* Four managers (Barry-Murphy, Cowley, Mellon and Moore) have a points per game return in the automatic promotion zone (above 1.70). However, Barry-Murphy has only managed eleven games, and Moore forty-two. There were only two in League Two last season (Cowley and Mellon) and they both won promotion.

* Six other managers (Coleman, Evans, Grayson, Jackett, Ross and Tisdale) have points per game returns in the play-off zone (above 1.50). Five of those are with clubs expected to challenge this season, the exception being Coleman.

* Three managers (Downes, Warne and Wilkinson) have points per game returns in the relegation zone (1.20 or below), although Warne has had two relegations from the Championship with a small club and Wilkinson is a rookie.

The caveat is obvious: these numbers can hide a multitude of variables. It is not just a case of having an experienced manager with a good track record, of course. Previous success and experience does not secure the future, neither does a lack of success or experience mean more of the same.

The players each club possesses will play a huge part in dictating their destiny, and the better players tend to belong to the wealthier clubs. Those wealthier clubs can afford to employ the better managers, theoretically creating a potent mix. In League One, there is a wide financial disparity between clubs, with the likes of Sunderland and Ipswich at the top end, and Wycombe and Accrington at the other. Clubs able to retain their better players will have stronger continuity.

On the flip side, a good manager and a good budget does not guarantee a good season. Some managers have spent their careers managing small clubs above their natural level and accordingly have a points-per-game return lower than their ability deserves.

As usual, the Vital Lincoln City Season Preview will try to bring together all of these strands: the managers, the players, the budgets, the continuity. Coming very soon to a computer screen near you.