Who Are The League One Managers? No.22: Richie Wellens (Swindon Town) 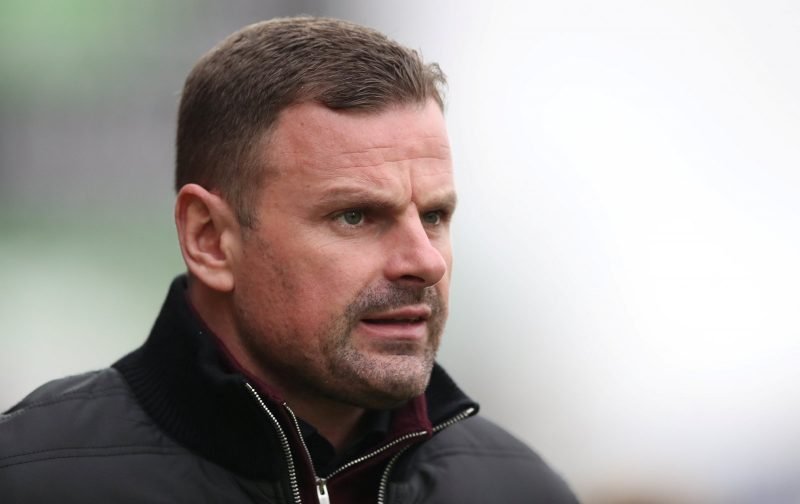 Yet another product of the famous Manchester United academy, Swindon manager Richie Wellens has spent the majority of his career in his native North-West. Hailing from Moston, the young midfielder was spotted by United assistant manager Brian Kidd at the age of ten and brought into the club’s youth system under legendary coach Eric Harrison. He did well enough to earn a four-year deal amid interest from Liverpool, Everton and Watford, and was given his debut as a 74th-minute substitute in a 3-0 League Cup defeat at Aston Villa on 13 October 1999. Things were not quite right off the field, though. The £20,000 signing-on fee and £1,000 per week wage packet bred over-confidence, and he admits that his attitude was not quite right. Spending too much time socialising, he also picked up an unfortunate conviction for drink-driving which could not have gone down well with Alex Ferguson. He realised that his days were numbered at Old Trafford, and on 23 March 2000 he signed for Third Division Blackpool.

Things were not easy at Bloomfield Road, a crumbling old ground with only two stands remaining in use. Blackpool were struggling in the bottom two of the Second Division (tier 3 at that time), and Wellens was signed in an attempt to escape relegation. By his own admission, he found the step down from the European champions to a lower division club challenging in many ways, and he took a while to settle. He was sent off at Oldham on 29 April 2000, the game finished 1-1 and Blackpool were relegated to the basement. They got off to a terrible start in 2000-01, sitting second from bottom at the end of September. They lost 7-0 at Barnet (who eventually finished bottom of the league) and were knocked out of the FA Cup at home by non-league Yeovil. Surprisingly, form improved drastically, and three successive wins at the end of the season took them into the play-offs in seventh place. A 5-1 aggregate win over Hartlepool in the semi-final took them to Cardiff, where a 4-2 win over Leyton Orient gave Blackpool an unlikely promotion.

Blackpool settled into mid-table back in the Second Division in 2001-02, but the season will be remembered for a run to the final of the LDV Vans Trophy. Blackpool scored an incredible nineteen goals in six games prior to the final, and the scoring spree continued with a 4-1 win over Cambridge at Cardiff. The 2002-03 season was relatively unexciting, with a 13th-place finish. Wellens was sent off in a 5-0 defeat at QPR on the opening day of 2003-04, and the side again settled into mid-table anonymity. The Football League Trophy again provided the memories, with a 2-0 win over Southend in the final at Cardiff. Wellens had played in three finals at the ground in four seasons, and won them all. At the end of the season, he was named in the PFA Second Division Team of the Year despite finishing in the bottom half of the league.

The 2004-05 season saw a poor start with Blackpool bottom of the table at the end of September. They eventually improved to finish six points clear of relegation, but it was to be Wellens’ swansong. He was sent off in two of his final three games for the club, and in June 2005 he signed for League One rivals Oldham Athletic after making 226 appearances for them. Besides feeling that he had stayed at Blackpool for too long, he wanted to be closer to home and his newborn child. The transfer was concluded as a straight swap for Oldham striker Scott Vernon in order to avoid having to pay Manchester United 50% of any transfer fee. Oldham challenged strongly for a promotion spot in 2005-06, sitting in the top seven in March before a run of three points from their final seven games saw them fall away to finish tenth. The poor form ran into the start of 2006-07, with Oldham in the bottom three at the end of August, but the side recovered well. A 1-0 win over Chesterfield on the final day took them into the play-offs in sixth place, but they were beaten 5-2 on aggregate by Wellens’ former club Blackpool in the semi-final. To rub salt into that wound, Blackpool were promoted. A form of consolation came when he was named in the PFA League One Team of the Year for the second time.

With his contract expiring at Oldham, Wellens moved on to League One rivals Doncaster Rovers in July 2007. After a poor start in 2007-08, Doncaster improved steadily to challenge for automatic promotion. They went into the final day at Cheltenham knowing that a win would take them up, but a 2-1 defeat combined with Nottingham Forest’s 3-2 win over Yeovil consigned them to the play-offs. A 5-1 hammering of Southend in the semi-final took Wellens to Wembley for the first time in his career, where a James Hayter goal just after half-time was enough to beat Leeds. Wellens had his fourth win from four major finals, and he was in the Championship for the first time. He was also named in the PFA League One Team of the Year for the second successive year, and for the third time in five seasons. He also picked up the club’s Player of the Season award to cap a great first season at the Keepmoat. The Championship was to prove far more challenging, and Doncaster were bottom of the table at the midway stage. A 4-2 win at Nottingham Forest on Boxing Day turned the season around, and a run of ten wins from twelve games saw them finish comfortably in mid-table.

At the end of the 2008-09 season, Wellens joined Leicester City in a million-pound deal. Leicester had fallen on hard times, but had just been promoted back to the Championship as League One champions under manager Nigel Pearson. Expectations were high, and Wellens made his debut on the opening day with a 2-1 win over Swansea, a match that also saw former Imp Dany N’Guessan make a goalscoring debut. Leicester coasted into the play-offs in fifth place, but a 4-3 defeat on penalties to Cardiff in the semi-final ended their season. Pearson moved on during the summer, replaced initially by Paolo Sousa, then by former England manager Sven-Göran Eriksson in October. Leicester were bottom of the Championship, but recovered well under Eriksson to finish in the top half. Wellens was named Player of the Season in May. Leicester started 2011-12 in mixed form, and Eriksson was replaced by Nigel Pearson in October. Leicester went on to finish ninth, well off the promotion pace, and were beaten by Chelsea in the FA Cup quarter-finals. Although captaining the side regularly, Wellens’ season was to end badly: he received a cruciate ligament injury during the home game against West Ham on 23 April 2012 and would make only four more appearances for the club.

Having recovered from the injury, in early October 2012 Wellens joined Ipswich Town on loan to gain match time. It was a period of turmoil at Portman Road, and manager Paul Jewell was sacked two weeks later. Wellens won only one of his seven games for the club, and was openly critical of the attitude of the other Ipswich players. He returned to Leicester, but picked up a different knee injury and was released in July 2013. Wellens admits that he was wary of the cruciate injury, which affected his performances for some time afterwards. He returned to Doncaster for a pre-season trial, signing a short-term deal in August 2013. Wellens regained confidence in the knee and agreed a permanent contract in January 2014. Things were not going well on the pitch, with Doncaster struggling towards the foot of the Championship. They went into the final game away to champions Leicester needing a win to ensure safety, but Wellens missed the game against his former club and Doncaster lost 1-0. Birmingham’s 2-2 draw at Bolton sent Doncaster down on goal difference.

Doncaster remained on the fringe of the play-offs for much of 2014-15 before a run of four wins from their last sixteen games left them in the bottom half. The 2015-16 season would see Wellens play for three different clubs, although it would be a significant period in terms of his future career. Having started the season playing for Doncaster, he spent a short period on loan to former club Oldham in November before signing an eighteen-month deal with Shrewsbury Town on 8 January 2016. It was at this time that he began to study for his UEFA A and B Licences, coaching younger players back at his first club Manchester United on a part-time basis whilst winding down his own playing career. He left Shrewsbury in the summer of 2016 after six months, and after brief spells with National League sides Salford and Macclesfield, he decided to retire from playing at the age of 36. He made a total of 698 appearances, scoring 48 goals. In 2019-20, he was inducted into Doncaster’s hall of fame.

He began his coaching career in earnest with former club Oldham Athletic, joining as first-team coach in July 2017. His chance in management came far more quickly than expected. The side started poorly, picking up just four points from their opening nine games to sit bottom of League One. On 25 September 2017, he was placed in temporary charge of the side after the dismissal of manager John Sheridan, and was appointed on a permanent basis on 18 October after winning his first three games. There was to be no fairy story, and seven draws from their last eight games saw the side relegated. Wellens paid with his job, dismissed on 18 June 2018.

However, he had made his mark despite the relegation. The next stop was League Two Swindon Town, appointed successor to Phil Brown on 13 November 2018. Swindon were in the bottom half of the table, and Wellens got off to a terrible start with a 4-0 home defeat by Carlisle. However, three successive wins lifted the side into mid-table where they were to finish. Wellens brought in thirteen players during the 2019 close season including the key loans of strikers Eoin Doyle and Jerry Yates, and Swindon started the season very well. By the middle of September, they were in the top three, and that is where they remained for the rest of the season. He was linked with a return to former club Blackpool in February 2020, but Swindon reacted by securing him on a new contract. When football was abandoned due to the coronavirus pandemic, the points-per-game calculation resulted in promotion as champions.

Richie Wellens enters 2020-21 with an unusual record: in three seasons as a manager, he has a relegation and a promotion to his name without having yet completed a full season. On that basis, it is anyone’s guess how he is likely to get on back in League One. He has the best of backgrounds, having played under the most successful manager of all time at Manchester United. Ironically, he also played under son Darren Ferguson at Doncaster. Not many players can claim to have played under both, and Richie Wellens will not be complaining if he can emulate the success they have enjoyed in management.

Who Are The League One Managers?No.22: Richie Wellens (Swindon Town):https://lincoln.vitalfootball.co.uk/who-are-the-league-one-managers-no-22-richie-wellens-swindon-town/#STFC #Swindon