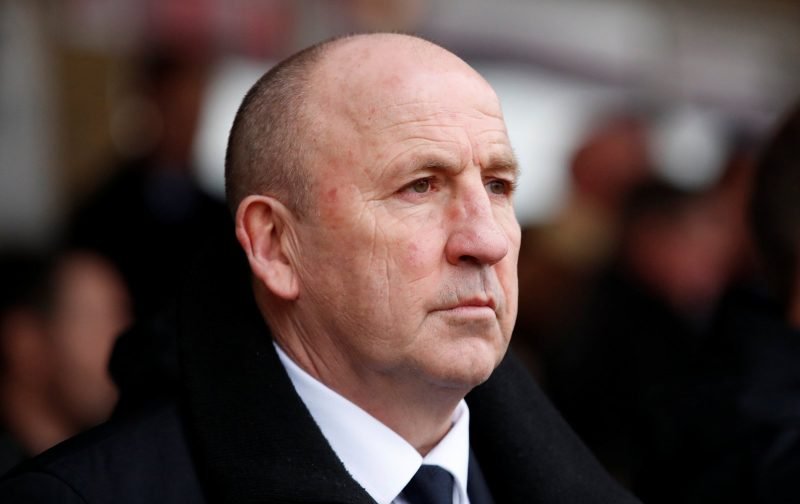 The history of football is littered with players and managers who have become associated with one club despite occasional forays into unfamiliar territory, and John Coleman is a prime example. Coleman never played in the Football League, but certainly made an impact as a non-league centre forward par excellence: over 500 goals in twenty years playing in the densely-populated Football League stronghold of the north-west begs the question of how he was never picked up by any of them. It goes without saying that such a man would start his managerial career in the same non-league circles, becoming player-manager of Ashton United in 1997, and he found immediate success in his first season as the unfashionable club finished third. He showed it was no fluke by repeating the trick the following year.

But it was only after moving to fellow-Northern Premier League Division One side Accrington Stanley and officially hanging up his boots that Coleman began to make a similar mark as a manager as he had a player. Two promotions in four seasons carried the club with the romantic name into the uncharted waters of the Conference, although the expectation was for a swift return to the newly-created Conference North. Quite the opposite happened: after two years of mid-table consolidation, Stanley cantered to the Conference title in 2006 and a place in the Football League for the first time in their history, although they were the third different club from the town to take their place in the League. Consolidation was the sole objective in order to establish themselves as a League club, and that is what they did over the next four seasons. Simply to stay in the League for those four seasons was a huge achievement, but their fifth season took them to the playoffs for the first of two occasions under Coleman. A 3-0 semi-final defeat to Stevenage ended the promotion dream, and perhaps suggested to Coleman that a move away might be the only way of progressing up the League ladder.

Midway through the following season, struggling League One side Rochdale appointed Coleman to save them from relegation. Unfortunately, it could not be done, and Rochdale ended the season in last place. The following season started poorly, and Coleman was dismissed almost a year to the day after his move to Spotland. The grass was certainly not greener in that part of Lancashire. It was not greener in Southport either, where he spent another undistinguished six months managing one of the sides he had played for twenty-five years earlier. His departure came after the club claimed his touchline behaviour towards match officials threatened the club’s family values, and branded his away record ‘a disaster’. For his own part, Coleman had made it clear on several occasions that he felt he should be managing in the Football League, so it was no surprise to anyone when the two parted company after twenty-five games.

A short but very interesting spell in Ireland with Sligo Rovers immediately followed in the summer of 2014 when Coleman succeeded former Imp Ian Baraclough as manager. Besides anything else, it is the first and only time Coleman has managed a club outside his native Lancashire. Despite some lukewarm league form, Sligo surprised the football world by reaching the second round of the Europa League and then by beating mighty Rosenborg 2-1 in Norway. Unfortunately, they lost the home leg 3-1 to exit the competition, and Coleman exited shortly afterwards. The reason? Accrington Stanley had come calling once more. In just his second season back in 2015-16, Coleman led Accrington to the League Two play-offs for the second time, but the result was, unfortunately, the same as the first time: a semi-final defeat, this time to AFC Wimbledon. Another bid for League One was anticipated the following season, but Stanley were destined to fall five points short of the playoffs.

The 2017-18 season began relatively inauspiciously, with Accrington sitting ninth at the midway stage. However, an amazing run of seventeen wins and two draws from the next twenty games carried Stanley to the top, with the championship confirmed with a 1-0 win over Lincoln in the penultimate game. Having been fourteen points behind leaders Luton at the midway point, they took the title by a clear five points. Their first ever season in the third tier got away to an excellent start, and Stanley sat fourth towards the end of October. Unfortunately, the bubble burst, and a run of just four wins from twenty-eight games saw them slide to within two points of the relegation zone with five games remaining. Three wins from the next four games secured League One status for another season, safety being confirmed with a 5-1 home win over relegation rivals Plymouth with a game to spare.

At the end of the 2018-19 season, John Coleman has managed Accrington Stanley in 779 league matches and has a win ratio of almost 44%. He has taken the club up four tiers from the Northern Premier League Division One to EFL League One. All four promotions have come as champions. That would be an outstanding achievement at almost any club, but all the more so at Accrington.

In a town of just 35,000 people, and with Blackburn Rovers just seven miles to the west, Burnley seven miles to the east, and the Manchester clubs twenty miles to the south, life has always been a struggle for Accrington. Indeed, that is one of the main reasons why the two original clubs both disappeared off the Football League map in 1893 and 1962. What Coleman has achieved in his seventeen seasons at the helm has been nothing short of miraculous. There has been no Dale Vince, no Stewart Donald, no former Manchester United players to buy their place in the Football League. They are one of the very last small clubs to reach the League without substantial amounts of money being lavished on it, and that is largely down to John Coleman and his undoubted talents as a manager.

In Andy Holt, he also has the right chairman to run the club in the correct manner. But can he take Stanley any further up the league pyramid, or is the glass ceiling of money insurmountable? Coleman will never be interested in treading water as a struggling League One club and facing an annual battle against relegation, but on average gates of 2,700, he has a real job on his hands if further progress is to be realised. 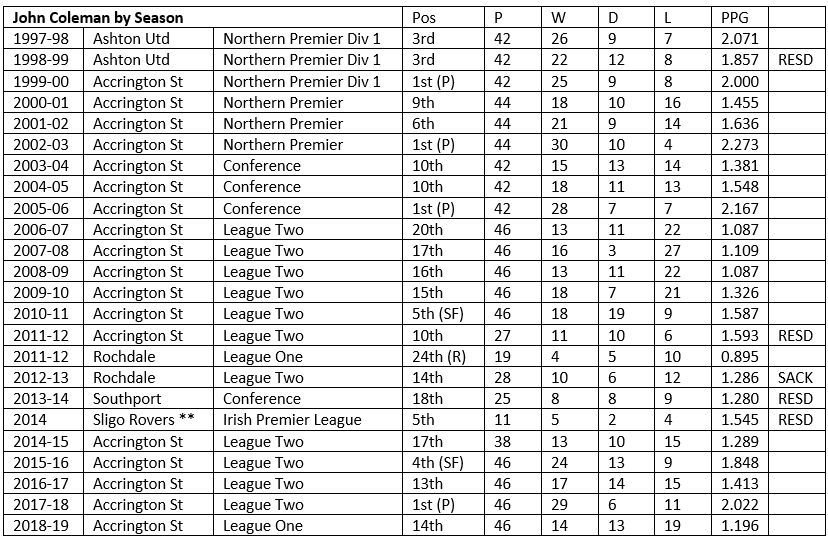 Figures are league games only; cup matches and playoffs are not included.

“Who Are The League One Managers? No.2: Wally Downes (AFC Wimbledon)” will be published tomorrow morning!