“We are fortunate to have a manager who is capable of managing within his budget.” 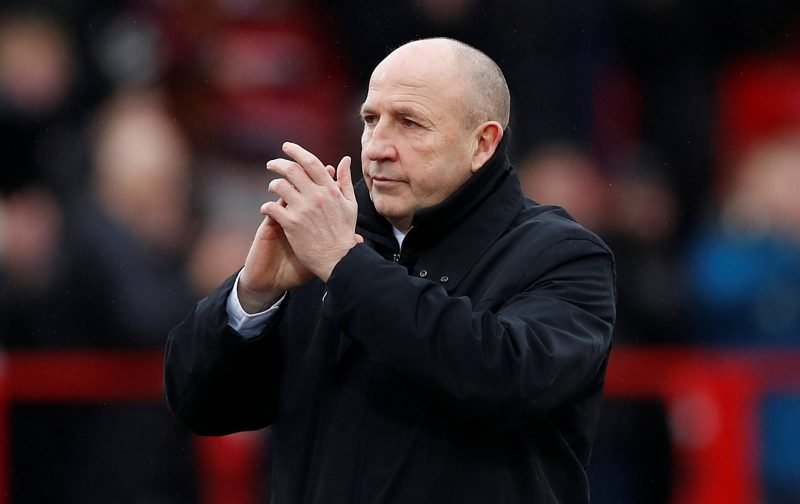 The last time The Imps and Accrington Stanley met in a League match was on Saturday 28th April 2018 at the Wham Stadium, with Stanley winning 1-0 and securing the League Two title in front of a crowd of 4,753. Their winning goal that day was scored by Jordan Clark in the 35th minute. Billy Knee had the chance to make it 2-0 from the penalty spot in the 44th minute, but Ryan Allsop made the save to keep it 1-0.

The last time the two sides met in a League match at Sincil Bank was on Saturday 16th December in front of a crowd of 7,696. In the 1st minute of stoppage time in the first half, The Imps were awarded a really soft penalty for a foul on Matt Green. Farrend Rawson was sent off as a result. Matt Green scored the penalty and City went in ahead at the break. In the 56th minute, Matt Rhead made it 2-0 to secure all three points.

Anyway, it’s time for the first Q&A of the season! Thank you to Accrington Stanley supporter Megan for answering our questions!

Only 5 years, my boyfriend is a huge Stanley fan and got me into football. Used to hate it, but now I actually love it!

14th. Started really promising and flirted with the playoffs, then had an awful spell over Christmas. Almost ended in a relegation dogfight but picked up enough points to cement a place in League One.

To maintain our usual solid start to a season over the winter months, which historically we seem to go on an awful run. A newly laid pitch will help, as last year we couldn’t play our style of football on the swamp we had!

Ross Sykes. A towering defender, an Academy graduate who has become a regular in our starting 11. Attracted interest from a host of Championship clubs.

Who do you think will finish in the top six?

Who do you think will finish in the bottom four?

A bogey team for Accrington. Play good attacking football. A well-supported club who should have no problem settling into League One.

The original Accrington side conceded the first-ever penalty in the English Football League.

No one! At a push, Jack Payne, we needed a strong midfielder last season, although our new signings seem to of fit that category!

What are your proudest and most embarrassing moments as an Accrington Stanley Supporter?

Most Embarrassing – walking into the changing rooms before a game to drop off a new players match shirt I’d printed thinking everyone was out warming up, and the new signing was stood stark naked in front of me!

Seamus Conneely. Midfield maestro, does the dirty work, we missed him massively when he was injured last year.

Do you have a Supporters Club and what role do they play at the Club?

Our supporters’ club is at the heart of the club, recently providing funds for a new scoreboard, much-needed pitch covers plus a ‘fanzone’ for supporters pre and post-match.

Either the night we got promoted, or playing West Ham at the Olympic Stadium in the FA Cup and only losing to a 93rd-minute goal.

Losing 2-0 to Portsmouth a few seasons ago. Awful weather and they scored in the 2nd minute and 88th. A dull game completely.

Not as such, although many former players are regularly spotted at the stadium on match days.

What’s the best thing about Accrington?

The people! I recently moved from Bristol to Accrington, and the people could not be kinder.

How does your club get by only charging £219 for a season ticket? I was astounded at the cost last season when you got promoted.

Our owner’s vision is to make matchdays a great day out for the whole family. We can sustain ourselves as a club more from polishing rough diamonds and selling them on for a profit, than fleecing fans for tickets, pies and pints (£1 a pint if we win and £2 from 12 until 6 on matchdays!)

We are fortunate to have a manager who is capable of managing within his budget.

Do you still talk about the famous mention for the club in that 1989 milk advert?

What milk advert?? Haha, it certainly put the clubs name out there, and I think we will be forever grateful, especially through the tough periods. Away fans still like to mention it; we just take it with a pinch of salt.

In terms of the teams and playing style, what were the main differences you found between L1 and L2?

Mistakes in defence are punished more in L1, and the players seem quicker, stronger and fitter.

Any plans to redevelop the away end, especially those ‘rustic’ toilets?

1 day for sure. We have made significant ground improvements in the last few years, all whilst working within our means and not spending more than we had. It will be done eventually, but there are/were bigger priorities.

Away fans will be pleased to hear that they do also get part of our new Eric Whalley stand, with brand spanking new bogs!

Are there big expectations with new striker Colby Bishop, especially after his goals in the friendlies?

Colby is an exciting signing, he’s quick, direct and good in the air. It’s a big step up from playing at Leamington part-time, but he seems like he will embrace the challenge and I’m sure he’ll be a fans favourite.

Will John Coleman leave you ever?

No. His ghost will still haunt the home dressing room when we are playing badly.

Do the fans enjoy the insight that Andy Holt gives about finances in these leagues or wish he’d be a bit more private? (I’m a big fan of it, stop getting fans demanding players you evidently can’t afford *cough* Bury *cough* Bolton *cough

He means well; he’s done fantastic things for the club, and he only has the clubs best interests and football in general in his ideas. Someone has to be a trendsetter and he is starting to get the ball rolling with his views, and others are speaking out. He’s a businessman at the end of the day, awarded an M.B.E for his services to it, and football is a business if we like it or not.

And even when some of what he says/does goes tits up; he’s the first to have a laugh about it. Top bloke.

"We are fortunate to have a manager who is capable of managing within his budget."https://t.co/kzzq31zD1G#ImpsAsOne #ASFC #OurStanley