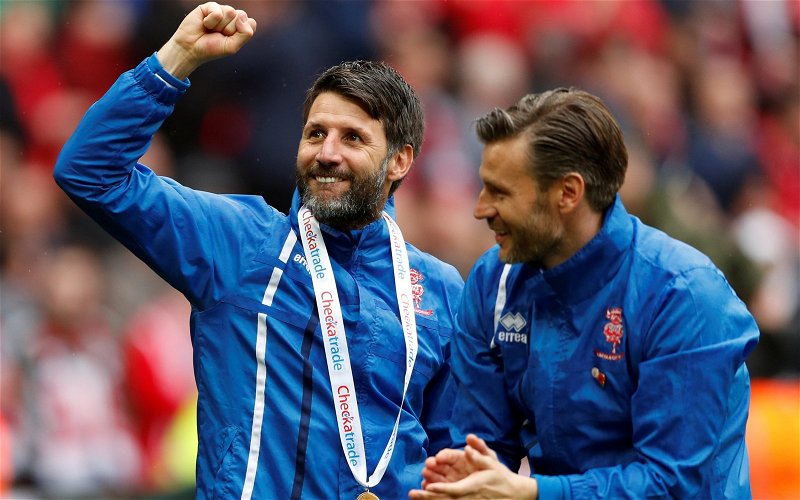 Much later than planned, here is Part Two of our End Of Season Awards!

I didn’t vote on this one because I wasn’t sure who to vote for, so we’ll go straight onto the poll result and members comments!

PerthImp: “Allsop. Pulled off some amazing saves which earned us important points, and a Wembley winner. Don’t forget he played a major part in getting us there with his saves v Chelsea.”

HitherImp: “Wharton was superb, old head on young shoulders and will go far. Come back, Scott…”

sedgleyimp: “Going for Allsop for the save at Wembley and covering for Vickers injury as with due respect to Farman 7th wouldn’t have happened.”

Comeback Of The Season:

I didn’t vote on this poll, but if I had, it would have been for the comeback at Stevenage. 1-0 down after 26 minutes, then down to 10 men in the 52nd minute, I thought it was game over, as did many around me! Sean Raggett made it 1-1 in the 58th minute and Ollie Palmer scored from the penalty spot in the 75th minute. From that point, I knew we’d win!

Impalex: “Stevenage away, no question.”

buckielugger: “The Crewe 2nd half was very unexpected after a poor 1st half. But I’ll plump for Accrington in the trophy. The Champions were a tough challenge and Farman was having 1st half issues….but a great turnaround to set us on road to Wembley.”

sedgleyimp: “I’m still going for the late draw at Mansfield as without it we would have been on the beach on the 5th of May.”

Opposition Supporters Of The Season:

I’m with Scotimp on this one. The 273 Yeovil Town supporters travelled to Lincoln on the final day of the Season with absolutely nothing to play for!

79imp: “Exeter’s made a decent noise in the corner and contributed to a cracking atmosphere all round on Good Friday. Gracious in defeat too.”

hulloutpost: “Tricky one this as to be honest nobody stood out at all so I couldn’t actually vote for anyone. The few sides that travelled in numbers didn’t really add much to the atmosphere and of the plucky triers that travelled in small numbers I don’t honestly recall any of them really impacting either.”

Most Bitter Opposing Manager Of The Season:

When I saw the nominations for this category, I always knew it would be between Steve Evans and Mark Cooper, and I had a feeling it would be the latter that would win the poll, too! As Scotimp says, “Mark Cooper always looks like he has been sucking lemons in every post-match interview”.

Scotimp: “Mark Cooper always looks like he has been sucking lemons in every post-match interview, and therefore must be nominated automatically after every game.”

hulloutpost: “Cooper and The Cowleys – it’s personal, because he made it so. The problem for Cooper is that he keeps losing. He got really upset last year that his overpaid guns for hire were outfought and out-thought by a bunch of long ball triers, the majority of that side who had finished in the bottom half of the NL the season previous to that. The home defeat and manner of it was the beginning of the end so far as the nailed on Championship for PGR went; all played out on national TV. Wonderful stuff but he cannot move on.”

MaineRoad_96: “Has to be Cooper, for all the reasons hulloutpost set out very well above.”

I had a feeling this would be close, but I also had a feeling that “Billy Knott to Harry Anderson v Forest Green Rovers (a)” wouldn’t get any votes! I didn’t vote, I was simply too busy at the time the polls were started, so I completely forgot about it. If I’d voted, I would have gone for Alex Woodyard’s pass to Elliott Whitehouse away at Crewe Alexandra, it was simply perfect!

ChesterImp: “Woodyard away v Crewe for Whitehouse. Fought for the ball, superb turn to get away from the midfielders, sublime defence-splitting pass picking up the run of Whitehouse who still had work to do but made the finish look easy.

Direct pub team? I’ll have another pint thanks.”

79imp: “That was a great bit of play from Woodyard. Also thought his pass for Ginelly at Wycombe was a beaut. So wish we could see him playing forward more because those flashes showed he’s got it in him. “

Gratzimp: “Rheady’s little dink for Frecklington to slot in vs Coventry. Totally flummoxed everyone with that, perfect on a plate chance.”

Most Magnanimous Manager In A Post-match Interview:

I had a feeling Danny Cowley would win this one but also thought it would be close because Paul Tisdale is a class act!

evenstephen: “Paul Tisdale when we beat them 3-2, he seemed to enjoy the game as much as we did.”

HitherImp: “Danny ought to be the masterclass in ‘how not to make a **** of yourself in a post-match interview’ and required viewing for all lower league managers at least.

Would spoil our fun laughing at the others, though!”

I didn’t listen to any of the post-match interviews, so I didn’t vote!

Scotimp: “The funniest one for me was Jack Lester after City had won 3-1 at Chesterfield. Lester muttered and mumbled his way randomly through the Top Ten Platitudes For The Post-match Manager before informing us that his side had tried to attack Bostwick because he isn’t a centre half.

Not surprisingly, Chesterfield are in the National League and Lester no longer works in north Derbyshire.

Luke Imp: “A toss up between Sarrl of Stevenage for his silly comments about our goals that afternoon.

Or Coleman for saying, “I don’t want to blame the ref and made excuses…” and then proceeded to moan for 5 minutes solid, making excuses.

Artell’s after the away game was a funny one, too.”

When I saw the nominations for this, I just knew one of Ollie Palmer’s celebrations would win it!

GertLushImp: “Palmer’s first v Exeter. Quite simply the most excruciatingly long disallowed goal celebration in the history of the beautiful game. I think it’s still going on now.”

HitherImp: “Has to be Ollie. Love the enthusiasm and that was a corker of a celebration!”

Chesterimp: “‘Scored’ at SW end, stopped in front of us, nearer to BM than the half way line, wondering why he was ‘Ollie No Mates’? Classic.”

Thank you to everyone that posted nominations, voted and commented during our “End Of Season Awards”.