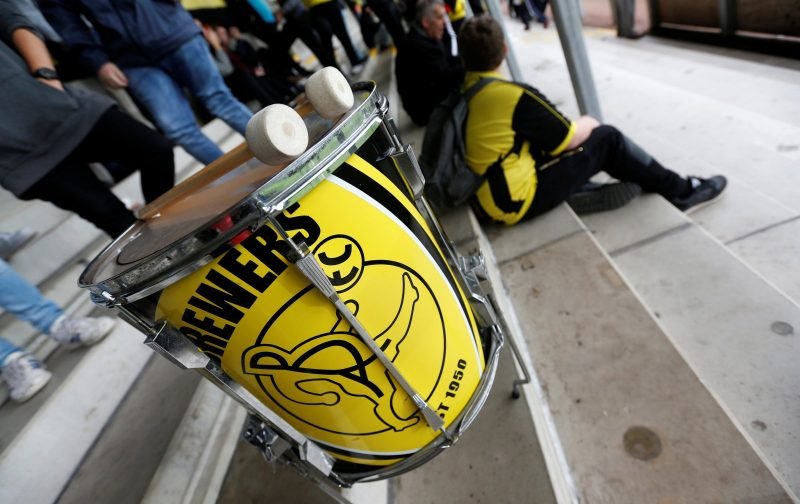 The last time The Imps hosted today’s opponents was on Saturday 7th March, which was the last time there was a crowd at Sincil Bank Stadium (8,474). City won 3-2 that day, thanks to goals from Tom Hopper (21′ and 38′) and Anthony Scully (62′). Joe Powell scored both for the visitors (6′ and 30′), and Lucas Akins had a penalty saved by Josh Vickers in the 79th minute.

First up, the answers provided by Jack:

My first Burton game was a 1-1 draw away at York in 2013, and, though not the most glamorous display of football, the experience was enough to encourage me to support Burton ever since.

It’s been a tricky start to Jake Buxton’s reign, sitting bottom of the league, and one win in our last sixteen is hardly how the manager would have wanted his time to go. He appears to be a strong leader, saying the right things, but tactically we look lost, and some confusing decisions have been made across the course of the season so far.

Who Are The League One Managers? No.5: Jake Buxton (Burton Albion)

I was hoping for safety from relegation. The Covid-19 Pandemic likely left the club in a difficult position, and, with the departure of Nigel Clough, the loss of key players like Scott Fraser, and early season injuries left most fans just hoping we could retain our League One place for 2021/22.

Charles Vernam has been a bright spark over the course of a drab season. His dynamic running has caused issues for every defence he has gone up against, and hopefully, he can maintain his good form as we look to turn our season around.

League One has been a really difficult one to predict so far this season. From the performances I’ve seen, I think Portsmouth, Doncaster, Hull, Lincoln, Ipswich and Charlton will make the top six.

Sadly, I think Burton and Wigan both seemed destined for relegation. I also think Northampton and MK Dons will join us.

It’s been an impressive rise for Lincoln from the National League, and it’s been nice to see the club maintain the momentum and drive towards the top end of the table. If they can maintain their current consistency, they will definitely be pushing for a top 6 spot.

Though I’d like to see us upset the odds, I think it’ll be a 2-1 victory for the Imps.

The Stig, who is well known for his anonymous role on ‘Top Gear’, is allegedly a supporter of the Brewers.

Jorge Grant. We have really lacked creativity going forwards this season, and, with his 11 goal contributions this season, it would be a pleasure to have him in our team.

What are your proudest and most embarrassing moments as a Burton Albion supporter?

One of the proudest moments has to be reaching and staying up in the Championship. A monumental achievement for our club.

However, in the second season, some embarrassing defeats were suffered, like a 6-0 loss to Fulham and a 5-0 loss to Leeds. Moreover, our recent form and performances have been quite painful to watch, and we have been easily rolled over by other struggling sides this season too.

I feel like Kieran O’Hara’s performances have been slightly overlooked this season. He’s improved significantly from last season, and, despite not keeping a clean sheet this season, he has kept us in many games on many occasions so far this season.

There was a Supporters Liaison Group that has been in use for a few years, though it was disbanded by the club in 2019, despite the appearance that progress was being made.

There is a huge amount of games to choose from, the incredible atmosphere ad we scored a late goal to all but confirm promotion to the championship against Gillingham, the historic 1-0 victory over Middlesbrough to take us to the Carabao Cup semi-final, but the true stand out for me is a 2-1 away victory at Sunderland. Two goals past the 90-minute mark gave us a glint of hope, whilst relegating the Mackems at the same time.

Aside from the prior mentioned large losses to Leeds and Fulham, the 2-1 loss away at Preston that cemented our relegation was quite painful. A great goal gave us a glimmer of hope, but a sucker punch double from Bolton turned the mood around within seconds.

As far as I’m aware, there is no Former Players Association at the club.

What is the best thing about Burton?

The Brewing Industry in Burton is undoubtedly the best part of the town, the most renowned too.

Burton used out known for its breweries. Are there any left?

Yes, there are still several thriving brewing businesses in the town, ranging from Molson Coors, who brew Carling, down to smaller independent breweries who brew their own real ales, which is a popular drink in the town.

How are Bostwick and Eardley doing?

Both have been okay since signing. Eardley looked a solid full-back, but has recently suffered from an injury, and is only just returning to fitness. Bostwick too has been perfectly solid, and certainly seems willing to put his body on the line.

Ben Robinson has been the rock on which Burton Albion has been built for 45 years, but he is in his 70s now; do you fear for the club when he eventually vacates the chair?

Fear maybe isn’t the right word, but I expect there could be a big change. Robinson has maintained the finances very well, and worked on a tight budget, but, depending on who takes the seat after him, this culture could change.

With a population of around 75,000, why do Burton find it so hard to attract support? The proximity of Derby and Birmingham?

Burton have had a young time in the Football League, especially when compared to those more local clubs, and this is probably a key contributor. Many followers of Burton also support one of the nearby clubs; Derby, Nottingham Forest, Stoke, Leicester, Birmingham, Aston Villa etc.

Nigel Clough is believed to have stepped down to safeguard the club financially, but did he really need to go? Could he not have suggested a lower wage instead?

I think he could have, but it became quite apparent towards the end of his time at Burton that Clough was really quite fed up. I recall a post-match interview after our 3-2 loss to Lincoln, in which he seemed to be extremely frustrated, as we dominated the game, but still conceded three. It was a recurring theme throughout the season.

You managed two years at Championship level quite recently. How realistic do you think is it for a relatively small club to be able to compete properly in that league now?

To be honest, I think the championship we competed in was the highest quality the league had been for many years. We played the likes of Newcastle, Fulham, Leeds, Aston Villa, Sheffield United, who have all made their way to the premier league since. It was an incredible feat, and, as football becomes a more expensive game, I would be incredibly impressed to see a club, operating under similar circumstances to ourselves, to gain promotion, and retain their place in their first season.