“Time for a change. He has not got the best out of this squad.” 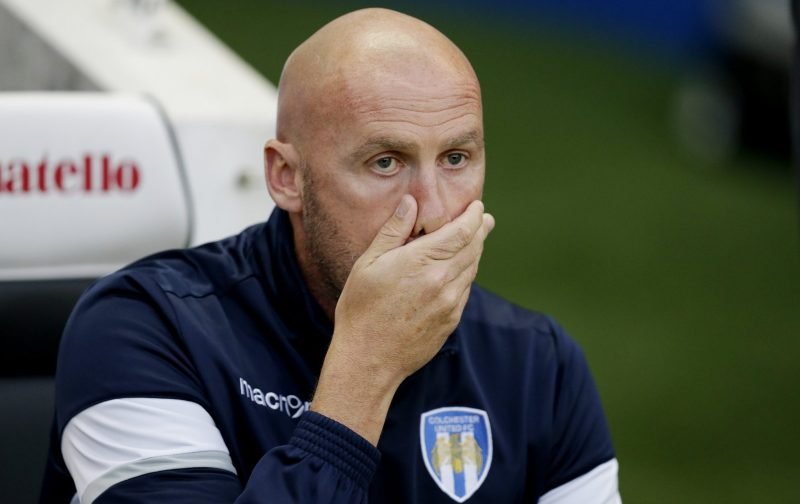 The first meeting of the season against tomorrow’s opponents Colchester United was played on Saturday 27th October at the JobServe Community Stadium, in front of a crowd of 4,962. The home side won 1-0 that day, with Frankie Kent scoring the only goal of the match in the 28th minute. A frustrating day was summed up nicely by the utterly useless Taxi company that took an absolute age to find us after the match to take us back to the Train Station!

Time for the Q&As! Thank you to Colchester United supporters Scott and Elliot for answering our questions!

How long have you supported Colchester United?

15 years, started when I moved from North London to Colchester.

Time for a change. He has not got the best out of this squad and did not make full use of some of the excellent loan signings we made in the transfer window.

Hopes were automatic promotion, expectations were playoffs as a minimum.

Plenty. Ryan Jackson and Sam Szmodics. Sam Saunders has been excellent since coming in recently.

Who did you think would finish in the top 7 at the start of the season?

Who do you think will finish in the final playoff spot?

Newport County. Think that win last night against Oldham Athletic was huge. Can see Exeter City slipping up on the final day. Obviously hoping for miracles though.

Who did you think would finish in the bottom 2 at the start of the season?

Which team do you think will go down with Yeovil Town. Notts County or Macclesfield Town?

I’ve lived in Lincoln for nearly 10 years so I’ve seen how the new investment and the shrewd appointment of hungry managers has galvanised the club from a virtually empty stadium to a full one. I think the most impressive thing is the connection between the football club and the City itself. Living and working here it’s evident that the people are all behind the club at the moment, which is something we are struggling to achieve. I do get irritated by the masses of new supporters who can sometimes come across as arrogant but I also know lots of genuine supporters who have been through the dark times and therefore, are deserving of your current success.

In recent weeks you have stumbled across the line, unfortunately for us gifting points to Newport County and Carlisle United which may ultimately hurt us. It’s a hard game to predict because of how inconsistent we are, I’ll go for 2-2.

Don’t know really. We have a huge rivalry with Wycombe which is geographically nowhere near us.

Neil Eardley, or any Goalkeeper who can catch the ball.

Proudest moments would be securing promotion to the Championship under Parky and how we performed in that first season.

For me, it has to be the opening day of the 2009 season. Mighty Norwich City back in League One. Norwich City 1 Colchester United 7.

There are too many to mention.

Do you have a Former Players Association at Colchester United?

What’s the best thing about Colchester?

It’s home. No matter where you live, it’s still home. For me, it was living in Layer to the rear of the zoo and hearing the animals at night!

Apart from perhaps location, major things that should/could have been better at your ‘modern’ ground?

Linked into location really, Parking and facilities. Nothing better than a central stadium that becomes part of the community so fans can socialize beforehand. Parking is a nightmare!

What’re your thoughts on one of your players doing the loser dance in front of us away fans when you beat us 1-0 earlier this season?

You’ve won the league. Our successes are fleeting. Take it as a compliment that beating you meant that much and move on.

You had such a solid start to the season and were right in the playoff places before Christmas, what went wrong? I thought you were a solid bet to be pushing for even a top 3 spot!

Lack of squad depth and the goals dried up. Norris and Nouble stopped scoring. January signings haven’t given the boost needed although I blame the manager for not giving Callum Roberts enough time on the pitch and making Newcastle take him back.

Ultimately the manager has to take responsibility. Fans dislike our chairman but he did provide decent signings this year.

Time to stop recruiting managers from within.

"Time for a change. He has not got the best out of this squad.":https://t.co/aWReb8Gq3t#ImpsAsOne #ColU #Colchester

Posted by Vital Lincoln City on Friday, 3 May 2019