Rampant Imps Swarm All Over Robins 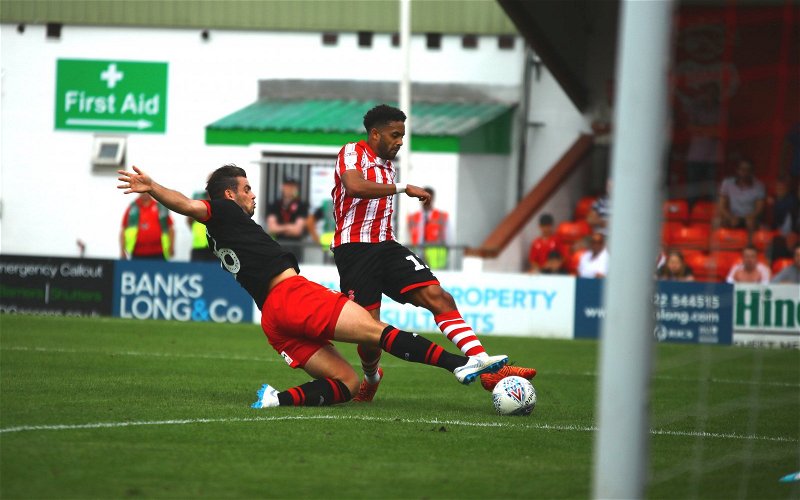 Lincoln City sent out a clear message of intent on Saturday as they thumped Swindon Town by 4-1 and moved into equal top spot with Exeter City in League Two. Make no mistake, that was some victory, especially when you take into account the last five minutes or so of the first half and the first twenty minutes of the second half when Swindon had the upper hand.

Danny Cowley made a number of changes, some quite unexpected, to the side which opened the season at Northampton last week. In came Harry Anderson, Bruno Andrade and Michael O’Connor who partnered new Captain, Lee Frecklington in midfield as Michael Bostwick was played in the returning flat back four alongside Scott Wharton with Neal Eardley and Harry Toffolo playing the more normal full-back positions. Shay McCartan sat in behind John Akinde upfront with Matt Green and James Wilson relegated to the bench. Danny and Nicky Cowley had clearly done their homework, especially with Anderson being included for his pace against Swindon’s former Premier League left-back Matt Taylor. It worked a treat as in the 10th minute Anderson raced into the penalty area and was upended by namesake Keshi Anderson and, despite Lancashire kicking the ball away once Akinde had placed it on the spot and goalkeeper Laurence Vigouroux’s poor attempt at doing the ‘floss’ as Akinde stepped up to take, the Imps’ frontman calmly slotted the ball home to great acclaim in the stands! 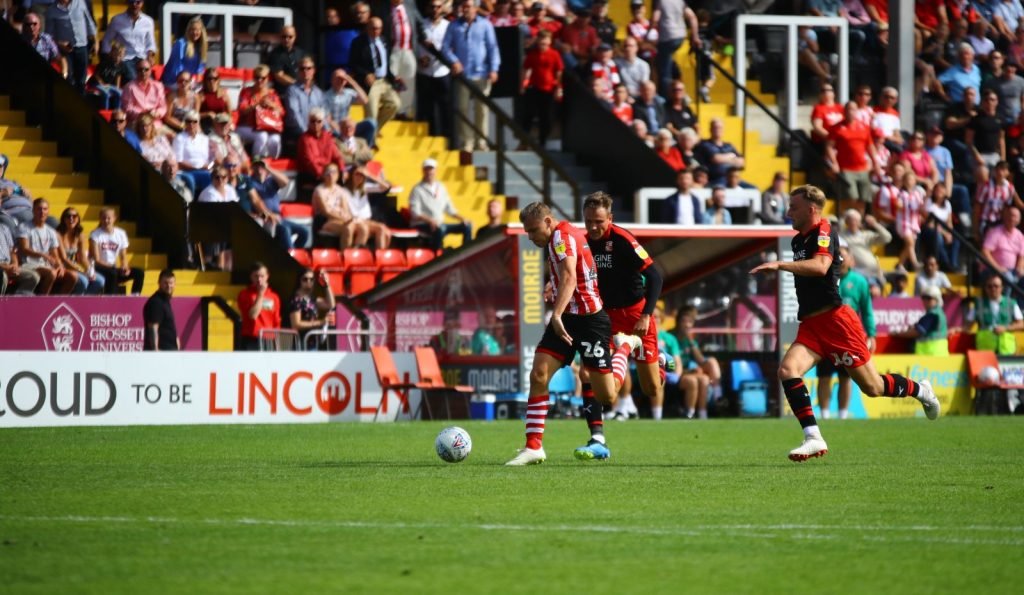 City were on the boil and another mazy run down the right by Anderson saw him cross the ball to Andrade at the far post, but his side-footed shot was kept out by Vigouroux. Moments later, Eardley put one into the mix and the ball bobbled about just waiting for someone in a red-and-white striped shirt to prod home but, despite Akinde’s best efforts, the ball was safely cleared. Soon after, a rasping drive from O’Connor was touched onto the bar by Vigouroux resulting in the corner that lead to City’s second goal. Andrade put in a wonder cross, right onto the head of the onrushing Frecklington inside the six-yard box and unmarked. Somehow Vigouroux kept it out and the ball fell to Bostwick who prodded the ball goal-wards, but again it was kept out. Bostwick doesn’t miss twice and as the ball bounced down to him a second time, he made no mistake with a fierce poke and it was 2-0.

The home fans were in delirium but, instead of forcing their dominance home, City began to slow things down, allowing Swindon to come more and more into the game. Vickers was called into action when a drive from Alzate had to be kept out and soon after McGlashan brought a fine save from Vickers to keep the score at 2-0. Just as it began to look like that was going to be the half-time score, the referee had other ideas. Taylor drove the ball powerfully goal-wards from distance only to see it strike O’Connor, as I saw it, on the knee, but the ref deemed it to have hit his hand, even though there could not have been any intention for deliberate handball. Up stepped Doughty to score his fourth of the season, three of those being penalties!

There was still time for Anderson to make another amazing run, nearly the length of the pitch, towards goal but unfortunately, no other City player could keep up with him and he was forced wide resulting in a cross which went wide.

Lincoln began the half strongly as McCartan again released Anderson down the right, but his cross was blocked before it could reach Akinde. Soon after, Eardley found himself in space and fired a little belter goal-wards, only for Vigouroux to turn it around for a corner, which came to nothing. End-to-end football ensued as Swindon tried hard to get the equaliser City searching for a third. It became obvious that the Robins were beginning to dominate the midfield, threatening to come back into the game. Enter the fray Tom Pett who replaced McCartan in the 65th minute. Still, Swindon seemed to control the midfield and City needed some added strength in there. Then came the master stroke as Cowley sent on Jason Shackell for his début allowing Bostwick to move into the middle. From that moment on, there would be only one winner, especially when the fresh legs of Green were sent on five minutes later. Within two minutes, City were 3-1 up as they burst forward with Andrade who put a pin-point cross onto the head of Green who then planted the ball deftly into the path of the unmarked Toffolo, who had continued his run having been involved earlier in the same move, to slot home in a somewhat ungainly fashion, but they all count! Five minutes later and it was all over as Pett put a beautiful cross into the path of Green who finished with aplomb, scoring his second of the season just six minutes after coming on! 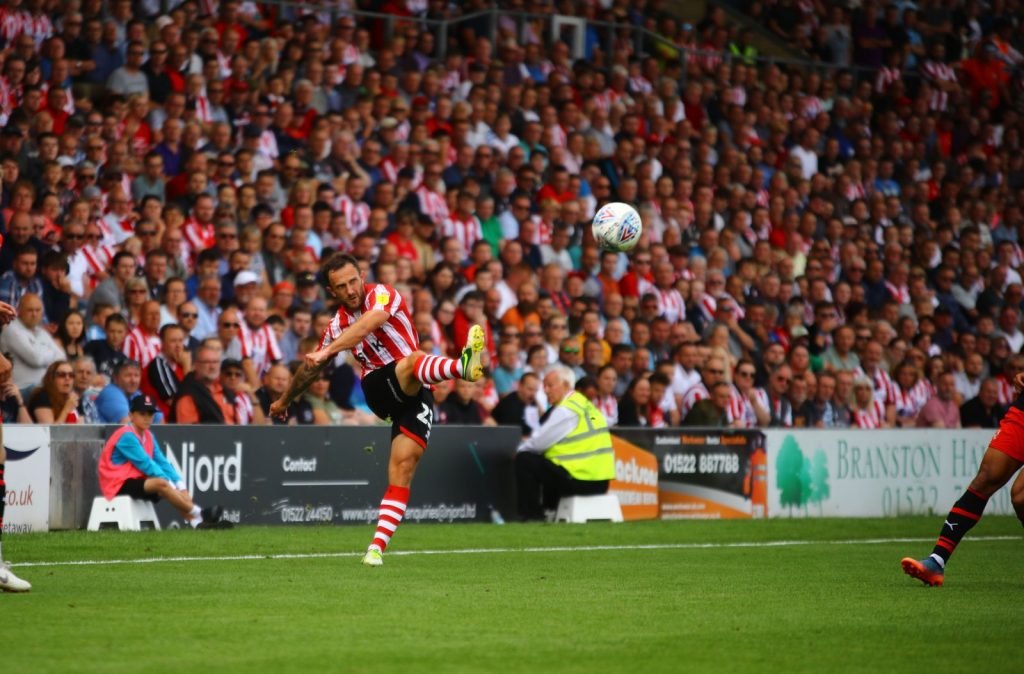 Swindon were beaten, and their 491 fans knew it as they piled out of the Stacey West End while the 7,918 home fans lauded a superb performance. Two wins in two, six points and already four more than last season! How lovely it is to be an Imp right now and the mouth-watering prospect of Grimsby to come.

Thank you to Graham Burrell and Lincoln City Football Club for the photographs!