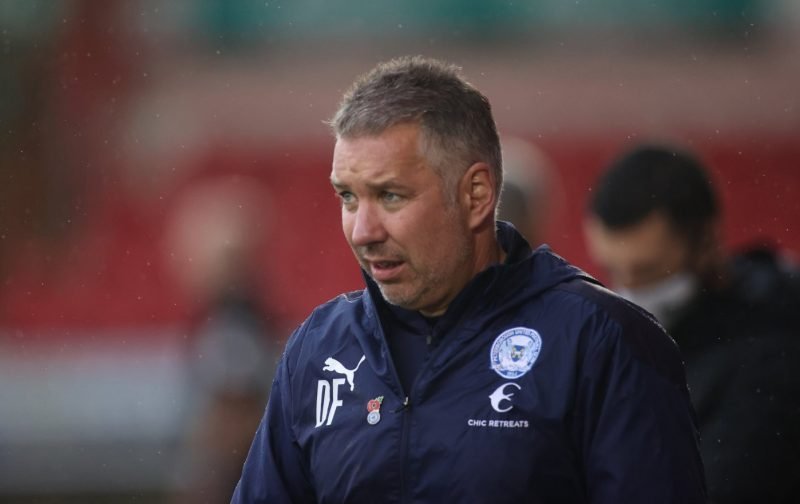 The last time The Imps faced tomorrow’s opponents Peterborough United at London Road was on Saturday 12th October 2019, in front of a crowd of 9,872, including 2,788 away supporters. The hosts won 2-0 that day, thanks to goals from Louis Reed (82′) and Ivan Toney (88′). Louis Reed was sent off after picking up a second yellow card in the 90th minute.

You can discuss what has been said in this article HERE, as well as many other topics on our 100% Imps forum! We have also published a Lincoln City v Peterborough United Quiz, which can be found at the bottom of the page. Every page view helps raise money for Lincoln City Football Club!

First up, the answers provided by Jack:

I’ve supported Posh for about 13 years now. My first game was a 1-0 victory over Stockport back in 2008!

Because of the PPG system, we finished 7th last season despite being in the Play-Off places when the season was halted because of COVID.

I’m a big fan of Darren Ferguson. He’s turned us into a team that plays good football and as a supporter, that’s what you want to see. I know he splits opinions amongst Posh fans, but he’s already led us to two promotions from League One and hopefully, it’ll be a third this season.

Posh go into every year hoping/expecting to be challenging for promotion, and I think this year was no different. There’s a lot of decent teams in League One nowadays so I knew it wouldn’t be easy but we’ve got a really good team on paper and I think that’s shown.

We’ve got a lot of talented players in our squad and I’m sure Lincoln are aware of that. For me, Jack Taylor is one of our top players and he has the ability to control any game. Our front 3 of Jonson Clarke-Harris, Siriki Dembele and Sammy Szmodics have got a lot of attention this year and rightly so. When you’ve got players of that quality up top, you’ve always got a chance of winning.

Following Hull City securing promotion to the Championship, do you think you will secure the required points total to join them? And which teams do you think will make the play-offs?

We had the chance to go up on Tuesday but despite wasting that, I do think we’ll get the job done. Luckily for us, I think the gap to Lincoln is too big. As for the Play-Offs, I think they’ll stay as they are now, with Lincoln, Sunderland, Blackpool and Portsmouth. It’s difficult to call out of those 4 who will go up, but based off recent form, I’d have to say Blackpool stand an excellent chance.

Following the relegation of Bristol Rovers and Swindon Town to League Two, which two teams do you think will be joining them?

Rochdale and Northampton are both 4 points adrift with two games to go, so I think both of them will be relegated to League Two.

I quite like Lincoln. I’ve got a few good mates who are Lincoln fans, so it’s been good to see them come up the leagues, and the rivalry between the two teams is more of a friendly rivalry. Michael Appleton has done an excellent job this season because I don’t think anyone expected them to be challenging at the top of the league! Lincoln have some excellent players and I know it’ll be a very tough game.

I think the disappointment of Tuesday will spur the Posh players on and they’ll get the job done with a 3-1 victory!

For me, Jorge Grant is the best player in your squad. His return from injury has seen Lincoln’s form turn right around and that’s no surprise for me. I’d seen him at Luton Town before he came to Lincoln and I’d absolutely love him at Posh.

What are your proudest and most embarrassing moments as a Peterborough United supporter?

I’m always proud to be a posh fan, but when we went to Old Trafford for the Play-Off Final in 2011 and beat Huddersfield 3-0, that was pretty special. Everyone expected Huddersfield to batter us but we dig deep, scored three goals in the space of seven minutes and booked our place in the Championship! As for embarrassing, Posh could never embarrass me! There have been a couple of FA Cup upsets that we’ve been on the wrong end of, such as Chorley this year but that’s just part of football.

It’s usually the same players that get the attention at Posh, but there’s a few that go under the radar. Joe Ward is one for me. His work ethic is incredible, and I think he’s got the most assists in League One this season. I know he made it into the team of the year, but I do think a lot of Posh fans underrate him. Nathan Thompson is another one who doesn’t get the credit he deserves. He is an absolute animal in defence and he definitely deserves a chance to finally play Championship football.

I’ll be honest I don’t really know about a supporters trust, so if we do they clearly need to do more to get out there a bit more!

I’ve already mentioned the Huddersfield game so I’ll go for something different. It would either have to be when we recovered from 4-0 down at half time at home to Cardiff to draw 4-4 in 2009, or when we beat Ipswich 7-1 in 2011. The Cardiff game was just an incredible comeback but the Ipswich win came early on in the season following our promotion and to put seven goals past a team who had been in the Championship for a while was pretty special.

We’ve had some pretty awful defeats over the years, but just because of what it meant, I’d have to say my least favourite was our 3-2 defeat at Crystal Palace that saw us relegated back to League One in 2013. We conceded late on and I’ve never felt as deflated as I did that day.

We’ve got a hall of fame at Peterborough for all of our best players/ managers from the past! I think we’ve got just over 30 players or so in there at the moment but I’m sure it won’t be long until there’s a few more names in there!!

What is the best thing about Peterborough?

I don’t know if I’m a bit biased but the best thing about Peterborough as a city is the football club. I don’t live in the city but I love travelling there on match day, and soaking up the atmosphere at one of the many pubs in the city centre. I can’t wait to get back there when fans are allowed back to games.