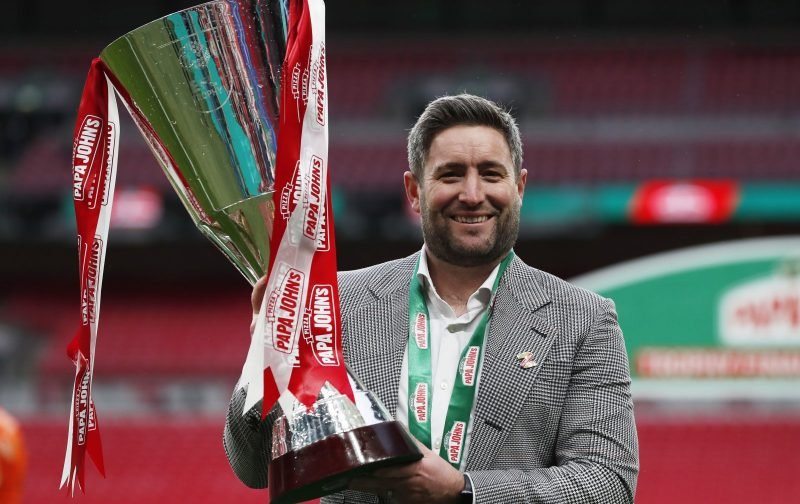 The last time The Imps played today’s opponents Sunderland at the Stadium of Light was on Wednesday 17th February in the Semi-Final of the EFL Trophy. This match finished 1-1, with Anthony Scully putting City ahead in the 64th minute and Charlie Wyke scoring for the hosts 11 minutes later. The Black Cats won 5-3 on penalties.

Ahead of today’s match, we have done a Q&A with a Sunderland supporter, so thank you to Martin from Roker Report for answering our questions!

My first game was in 1986-1987, which was the season we were relegated to the third division for the first time. I’d been wearing my red and white scarf for school for a while before that!

Outside of the play-offs, thanks to a combination of horrendous management and the ridiculous PPG finish.

Lee Johnson has been a breath of fresh air, and I really like what I’ve seen – and heard – from him so far. I have to admit he wasn’t my first choice as manager, however, he’s really embraced the club and looks to have the personality to succeed. He immediately reinstated McGeady, and has been really progressive tactically. We have gone from a manager who had plan A and that was that, to one who has plans A to Z – and the players get it.

To get promoted. Simple. Without being arrogant, if that’s not Sunderland‘s aim in League One we should pack up and go home.

Charlie Wyke has transformed from a useless lump to an incredible marksman and looks like scoring every game. Aiden McGeady has been superb since his return, and is a cut above. But from a purely footballing point of view, on loan defender Dion Sanderson is certainly one to keep an eye on. He’s Premier League class, and we are lucky to have him.

I think the top three will come from Hull, Peterborough and us, and Lincoln, Doncaster and Ipswich will make up the rest of the top six. I fancy Ipswich under Cook. He’s a good manager. I wouldn’t be surprised if they go up via the play-offs.

Who knows?! I’m looking one way only! Hopefully, it will involve Bristol Rovers, purely because of Joey Barton.

I think you’ve done great this season, your rise under Cowley was very impressive and I’ve always liked Appleton – he’s a very good manager who’ll be in the Championship soon – hopefully with you.

I think it’ll be a tight game despite both teams’ form. I’m hoping we’ll get the three points – 1-0 Sunderland.

Our striker, Thomas Hauser, was the first German to score a top-flight game in English football.

Jorge Grant – he’s got a bit of everything from midfield. I’m glad he’s injured!

Proudest would be beating Chelsea 4-1 at home in the late 90s. We’d just got promoted and it really showed we meant business.

Most embarrassing. Where do you start? Our gutless relegation under the absolute fraud that is David Moyes is right up there. Regardless of what anyone thinks, that fella is a pathetic person who absolutely bottled the job at Sunderland. Took a good team and completely f***ed them up.

Luke O’Nien – may sound strange as he is pretty highly rated, but the lad is class. He can literally play any outfield position, and his attitude is absolutely spot on. He’s a potential Premier League player.

There has been talk of one via supporters group Red and White Army, but it’s not come to fruition as yet.

There have been many, but the victory over Chelsea in the FA Cup Quarter-Final in 1992 is right up there – I don’t think I’ve ever celebrated a goal as much as I did when Armstrong scored in the last minute.

Again, plenty to choose from. Right now I’d go for the 5-1 defeat to Newcastle in 2010. Just for the gloating that resulted, more than anything else.

We do, but they don’t seem to do that much, publicly anyway.

I’m originally from Co Durham, but the best thing about the region is the coastline and countryside. It’s stunning, and people who aren’t from the area don’t realise it.

Congrats on winning a trophy last Sunday, but would the season still be a failure if that’s all you have to show for it?

Thank you – after so many Wembley defeats it was nice to see. But absolutely. We have to go up. If we don’t, we’ve failed this season.

If a new series of “Sunderland Till I Die” was made, would it be as much fun as last time?

Fun? I missed that. It was an interesting series, but we can do without any more series, thank you!

What kind of a summer transfer window are you expecting having been taken over by a French billionaire?

It’ll be sensible and pragmatic. We won’t be throwing cash around. The investment will be made in the academy with the aim of building something long term and sustainable rather than a quick fix.

There is a rumour that Danny Cowley turned down the manager’s job there because your new chairman stated that he expects Sunderland to be in the Premier League the season after next. Are you as supporters expecting such dynamic progression?

Think that’s b******s, to be honest, and contradicts what we know and have heard about our new owner’s approach. Cowley allegedly didn’t want to work with a sporting director, which is a critical position in our new set up.

As supporters, we have no such expectation. If we can get up this season and compete relatively well next season in the Championship that’d be great.

Ross or Parkinson. Which was the worst?

Parkinson, by far. Ross is a good manager. He started off behind the 8 ball and almost got us up. He was screwed over by owners trying to flog the club, and was a sacrificial lamb when yet another takeover fell through. Parkinson decimated the team, alienated our best player and turned us into a mid-table team. A pathetic manager.