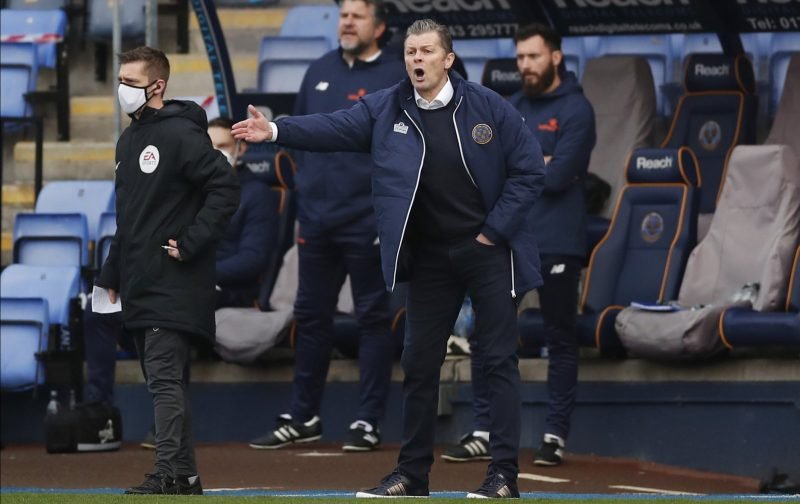 The last time The Imps faced tonight’s opponents Shrewsbury Town away from home in a league match was on Saturday 11th January 2020, in front of a crowd of 6,275, including 558 away supporters. From what I can remember, it certainly wasn’t a game to remember as such, with a penalty each scored by both sides, with Oliver Norburn scoring for the hosts (36′) and Tyler Walker for City (48′).

Ahead of tonight’s match, we have done a Q&A with a Shrewsbury Town supporter, so thank you to Sam for answering our questions!

When he was first announced as I was a bit unsure after hearing what Birmingham fans had to say but as soon as he came in the players knew what was expected and he’s done wonders with a bang average squad. He had also been in hospital for a good couple of months and hasn’t been at a game for 4 months but had been managing the team from his hospital bed which we’ve given him huge credit for.

We had hoped for mid-table, due to our previous manager it didn’t turn out to be the case due to his shocking tactics but hopefully for next season.

Young left-back Nathanael Ogbeta who signed from Man City on a permanent has been excellent since he came in. Will go right to the top no doubt. Harry Chapman can also be very dangerous.

Following Hull City securing promotion to the Championship, do you think Peterborough United will hold on to the second automatic spot? And which teams do you think will make the play-offs?

Peterborough United to go up automatically with Hull City, and I believe that Sunderland, Lincoln, Blackpool and Portsmouth will make the play-offs with Sunderland going up.

Following the relegation of Bristol Rovers and Swindon Town to League Two, which two teams do you think will be joining them?

Have a nice fan base and seem a well-run club. Still not forgiven your ex-player, Matt Rhead, though for the assault on Dean Henderson at Wembley in 2018 which in the end cost us the game in my opinion.

Anthony Scully, each time he’s played against us he’s been the best player on the pitch by a mile.

Proudest was the 2017/18 season when we defied all the odds and very nearly won promotion to the Championship or when we came back from 2-0 down against Liverpool last season.

Haven’t really felt embarrassed when supporting the club. I wasn’t really old enough to properly remember our relegation out of the Football League but it would have most likely have been that.

Josh Vela, has improved massively since Cotterill joined as is now one of the first names on the team sheet.

When we beat Charlton at home in the play-off semi-final in 2018. After that game, I honestly thought that we’d have won at Wembley but sadly wasn’t the case.

I don’t mind getting beat heavily if the players have tried. One game that sticks out was Oxford away under John Askey. Lost 3-0 we didn’t create anything, and the players didn’t look bothered in the slightest that we’d lost. When we lost 1-0 to Liverpool was awful to watch too. Awful ground is Anfield and we didn’t try to win the game whilst playing their under 23s.

Not that I’m aware of.

What is the best thing about Shrewsbury?