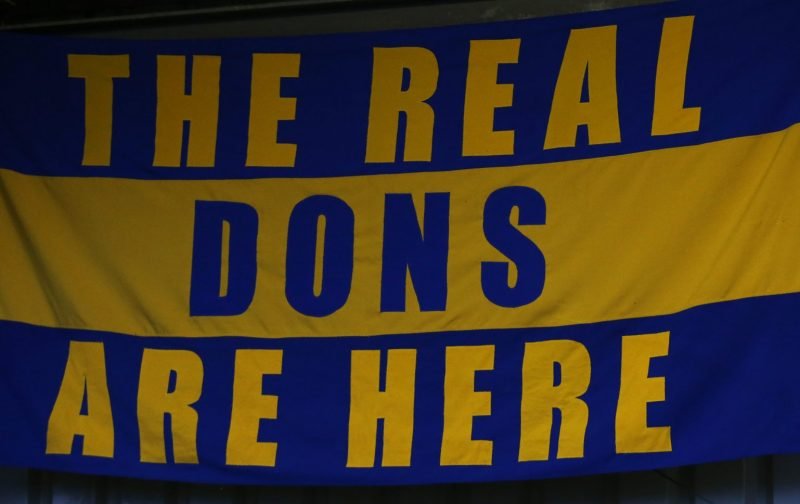 The last time The Imps faced today’s opponents AFC Wimbledon away from home was on Saturday 2nd November 2019 at Kingsmeadow, in front of a crowd of 4,378, including 709 Imps. The weather wasn’t great and the match wasn’t much better. It finished 1-1, with Jack Payne putting City ahead in the 31st minute and Kwasi Appiah scoring in the 2nd minute of the stoppage time of the second half to share the points.

Ahead of today’s match, we have done a Q&A with an AFC Wimbledon supporter, so thank you to Tim for answering our questions!

You can discuss what has been said in this article HERE, as well as joining our AFC Wimbledon v Lincoln City Match Thread! We have also published a Lincoln City v AFC Wimbledon Quiz, which can be found below the Q&A. Every page view helps raise money for Lincoln City Football Club!

I’ve supported Wimbledon since 1976. My dad and grandad did before me. I live in Yorkshire now so I didn’t watch AFC Wimbledon when the new club formed in 2002 because all the matches were miles away, but once we were promoted to the Conference and started playing some matches nearer home I began to go again. And this season lockdown has meant I’ve been able to watch more matches online.

20th. One place above relegation.

I like Glyn Hodges. He got us out of trouble when he took over last Autumn. He was a Wimbledon player when we rose from Division 4 to Division 1 in the 80s and was our first full international. He was probably the most skilful player in that team. He has coached at the highest level. We started well this season, but a recent poor run (4 points from the last 21) has left some fans unhappy, even though we’re still better placed than last year.

I hope we stay up, simple. Despite the recent run I think we will. Although we have a great new stadium back at Plough Lane, but we still have one of the smallest budgets in League One. Staying up would be an achievement. Some supporters are frustrated with our counter-attacking style, we regularly only have 30% possession, which was successful early in the season but less so recently.

Joe Pigott, obviously. With 12 goals and numerous assists, he’s one of the best strikers in League One. But he missed the last match injured so may not play. I’d also highlight fellow striker Ryan Longman, only 20 and on loan from Brighton. He’s direct and great to watch running at defences.

I’ve only watched our games but the best sides I’ve seen have been Charlton and (although we beat them) Peterborough.

Which teams do you think will finish in the bottom four in League One?</strong

I think it’ll probably be four of the current bottom eight although I’d expect that with games in hand Bristol Rovers, who stuffed us, and maybe Rochdale, will climb out. Of those slightly higher, Gillingham and the team who shall not be named looked ordinary against us.

Our paths haven’t crossed much. We got promoted together once in the 80s I think- but we don’t have much history, so most fans don’t have a particular view.

Personally, I’d love to see Lincoln go up ahead of some of the bigger clubs. Lots of us are hoping to come to Sincil Bank though. We missed that last year.

In our current form, I’d certainly take a point. With Jaakko Oksanen back (see below) I hope our defence will be better. The optimist in me says 1-1, the pessimist 0-2.

We have the youngest squad not just in League One, but in the whole EFL. Lots of potential but quite a few mistakes too.

Don’t know them well enough sadly. We already have Alex Woodyard, who used to play for you. I like him!

Proudest. Three please! Beating Liverpool in the 1988 cup final. Promotion to the Football League in 2011 only nine years after forming. And the League Two play-off final win in 2016 against Plymouth, at Wembley again.

Embarrassing? I’ve never been embarrassed to be an AFC Wimbledon fan. I think our supporters have achieved unprecedented things since starting from scratch in 2002. But the worst moment was relegation from the Premier League in 2000- the beginning of the end of the original Wimbledon, which led to the scandalous move to Milton Keynes, and then the start of AFC. To make matters worse the team who relegated us were my local team, Bradford. They were so chuffed to stay up they had an open-top bus tour. My first job after the match was to ring the chairman and ask him if the media organisation I worked for could come on his bus. As a Wimbledon fan, I felt it was the least he could do!

Young holding midfielder Jaakko Oksanen, who’s on loan from Brentford. He came back from a long injury in our last match and made such a difference. I think his absence partly explains why what was a good defensive record isn’t any more!

Yes of course. The Dons Trust. We’re proud to be supporter-owned and supporter-run.

Other than those above, Bradford 0, AFC Wimbledon 0, May 2019. We completed the ‘great escape’ and avoided relegation after being 11 points adrift. To do it with 2000 Dons fans celebrating with the players on the pitch was special.

Bradford 3 Wimbledon 0, in 2000, which pretty much sealed our relegation from the Premier League after 14 years. We conceded a penalty that never was, had a man sent off, felt hard done by all day and I think many of us knew that was likely to be the beginning of the end.

Not sure. Don’t think so. But our legendary goalkeeper from our cup runs of the 70s, Dickie Guy, is club president, and a lot from the Premier League days of the 80s and 90s still have strong links. Even Vinnie Jones, who’s given his FA Cup winners medal to the club, pops back from Hollywood occasionally.

What is the best thing about Wimbledon?

Easy. The fact that after 29 years away, its football club is finally now back in it, with a spectacular new stadium just yards from its historic home in Plough Lane.

“I like Glyn Hodges. He got us out of trouble when he took over last Autumn. He was a Wimbledon player when we rose from Division 4 to Division 1 in the 80s and was our first full international.”