Michael Appleton: “They’ll come to the stadium full of energy and excitement really, on the back of a good result.” 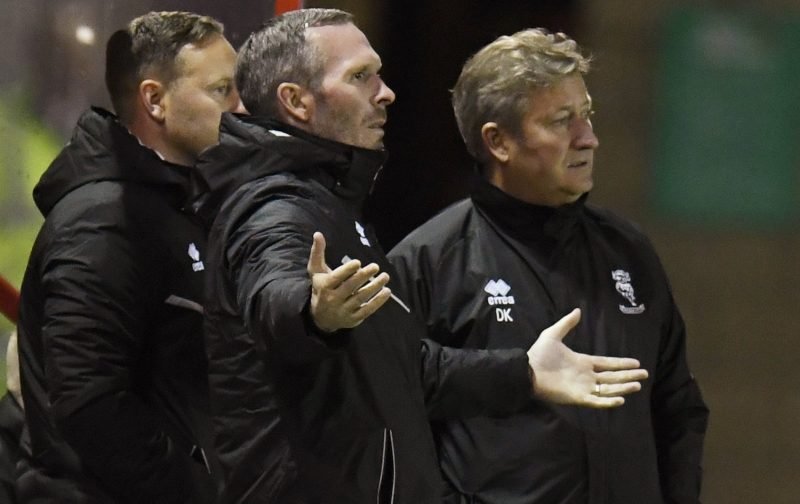 The mounting injury concerns were the major topic of discussion ahead of the midweek fixture versus Swindon Town.

You can discuss what Michael Appleton said earlier today HERE, as well as many other topics on our 100% Imps forum! We have also published a Lincoln City v Swindon Town Quiz, which can be found below the summary. Every page view helps raise money for Lincoln City Football Club!

Injuries: In addition to the doubts about Anthony Scully it was revealed that both Jorge Grant and Adam Jackson have only a 50/50 chance of being available for the game. Whilst MA did not specify JG and AJ injuries it would appear that Scully has a dead leg type injury.

“If they come through great. If not obviously we’re going to be, yeah – very low on numbers without those three”.

The return of Theo Archibald training, whilst welcome has to be viewed in the context that he is nowhere ready for a full return to action and may be good for 20/30 minutes at best.

MA has contemplated the necessity to involve academy players like Ben Sault and Freddie Draper but as well as they have done, the reality is they are nowhere near ready for the nature of the task Imps find themselves in.

“I’m all for giving players the opportunity when the time arrives……but sometimes players get opportunities because of the situation we’re in at this time”.

MA explained that with youngsters it is ideal to play them when the team is doing well. However whilst that particular box is ticked the absence of so many experienced players makes it very problematic for them. The added pressure of being top is also not helpful for them.

“I want them relaxed, normal game but with us top that’s not the case”.

Swindon Town: They achieved a fantastic result against Crewe, topped off with a late winner that undoubtedly will have given them a boost.

“They’ll come to the stadium full of energy and excitement really, on the back of a good result”.

In combination with being able to play with no expectation and fighting for their lives, those are the factors that will make them really dangerous.

In John Sheridan, they have a very experienced manager who has ably demonstrated in the past how he can successfully galvanise sides in sticky situations.

There have been a couple of formation changes since John Sheridan took over has he has striven to establish what is best for the players at his disposal.

Michael Appleton: "They'll come to the stadium full of energy and excitement really, on the back of a good result."https://t.co/XIY4d7hKjF#ImpsAsOne #ProudToBeImps #STFC pic.twitter.com/SMpa5mcU5w