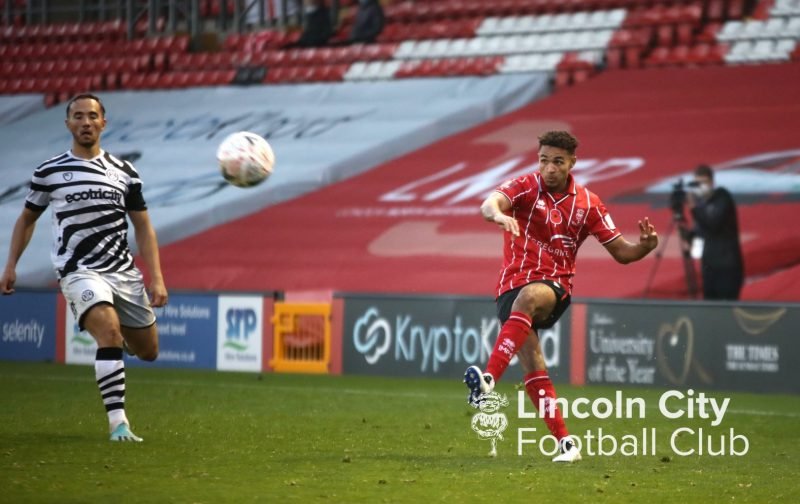 Views from Merthyr Imp following Saturday’s 6-2 win at home against Forest Green Rovers in the First Round of The FA Cup: “Forest Green and their supporters must have felt like we did against Liverpool – pity we couldn’t get a seventh goal.

Good to see some of the play in the opposition penalty area turned into goals – we’ve been building up to something like that.

While they played well enough I didn’t think either Gotts or Archibald did enough to show they should be starting games. Melbourne did a lot of good things but one or two not so good – put it down to being a bit rusty – and I tend to think he’ll be first choice left-back when fully fit.

Are we having a goal of the game competition? Difficult to choose.”

You can discuss what has been said in this article HERE, as well as many other topics on our 100% Imps forum! We have also published a Lincoln City v Forest Green Rovers Quiz, which can be found below. Every page view helps raise money for Lincoln City Football Club!

Impish: “Breath-taking going forward and very pleasing win with a patched-up side playing. I think it shows the amount we have progressed as a club when FGR used to be a nemesis in the NL, and how much of a gulf League One is compared to a side doing very well in League Two.”

Chimpimp: “A number of encouraging individual performances today from players who aren’t first choices at the moment.

Scully was fouled for the penalty and scored two well-taken goals. He is fairly one-footed and as MA said after the match can be a bit blinkered/greedy. But the last couple of matches there have been signs that these weaknesses are being worked on… so an improving player, who can score goals.

Archibald has started figuring a little more and while he hasn’t yet set the world on fire, you can see with a bit of time, confidence and MA assisted improvement has the potential to be a real player.

Edun, Roughan even Melbourne have the potential to dramatically improve…

… but the one the caught my eye today was Elbouzedi. He couldn’t even make the lizards starting eleven and only had a few minutes against a beaten L2 side. Nonetheless, he travels so well with the ball and goes past people. Perhaps to no real effect as yet but not many people can do what he does and if that ability can be tapped into he could be a real asset.”

Gaz_Imp: “In terms of the team going forward, two things that got me yesterday – Harry and Skully looked a really good pair down the right. Eyoma did well but think this needs seriously looking at. Other is Johnson through the middle over Hopper is a tough call now.”