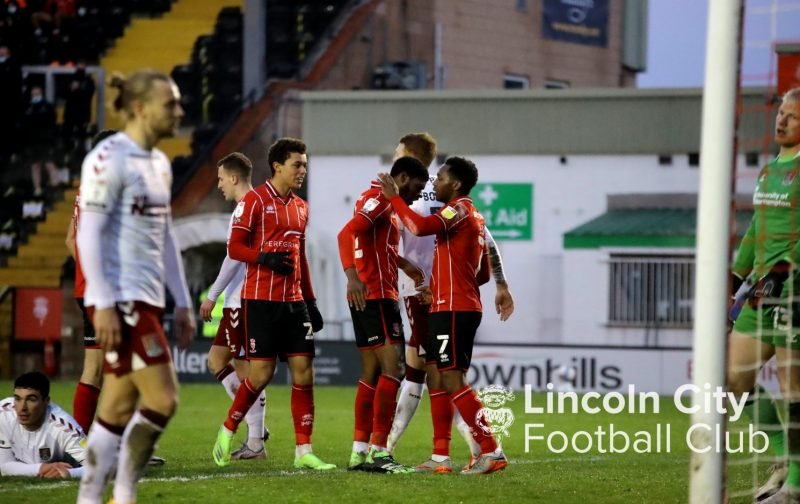 Views from Gaz_Imp following Saturday’s 2-1 win at home against Northampton Town in League One: “Great to get the win in the bag after such a long break and COVID issues. Thought the two full-backs were excellent. Edun getting better and better after Appleton publicly said no one has put their stamp on left-back position, excellent man-management?

Their goal was bloody superb. Puskas award stuff! A clean sheet would have been great but got to applaud and be thankful we were already 2 up!

On to a massive game Tuesday!”

You can discuss what has been said in this article HERE, as well as many other topics on our 100% Imps forum! We have also published a Lincoln City v Northampton Town Quiz, which can be found just below. Every page view helps raise money for Lincoln City Football Club!

Rasenimp: “Very hard-fought win. Northampton were poorer second half but v. competitive first and we had a few heart in mouth moments.

Good to see we can win games in different ways, as we have in the two fixtures against them.

hulloutpost: “In some ways the most satisfying win of the season. A hard battling win against a much-improved Northampton who ran around like it was their cup final. Imps showed great maturity, didn’t panic and took the game with a couple of well-worked goals. Not at our most fluent and credit to Northampton for that, but the mark of a good team who know their system to come through and win.”

PerthImp: “FT. Much improved Northampton from the first game. They pressed and chased the ball for the whole game and made life very difficult for us. I think we looked a bit under the weather, though we got a bit of our passing game going in the second half and did enough to win with two good goals. Great finishing goal for Northampton at the death. For me Edun was MoM. His passing was excellent and he played all over the pitch and laid on a superb cross for the first goal. Bring on the wounded Portsmouth (0 – 4 Ouch 😳😳😳😳). That will be a huge test but with our away record we might just catch them trying too hard to win 🤞.”