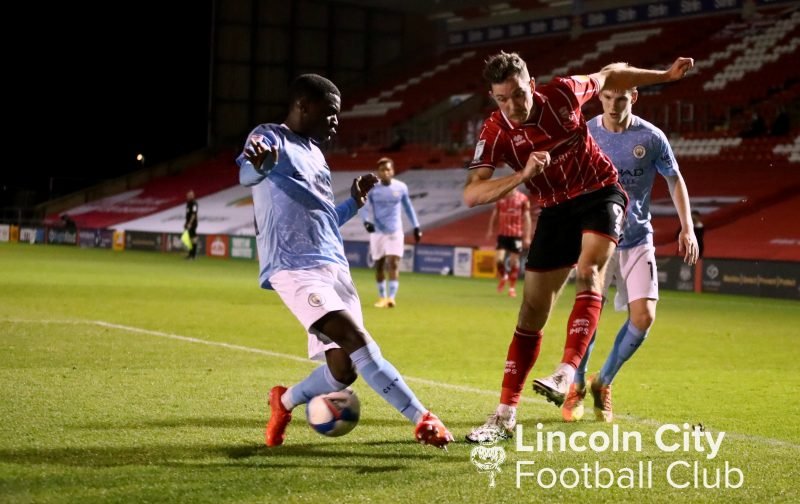 Views from sedgleyimp following Tuesday nights 1-1 draw at home against Manchester City U21s in the EFL Trophy: “The main issue for tonight for me are 5 yellows which will affect us if we are looking to progress in this competition. All bar Hopper are central midfielders and you just know that they’ll get the suspensions for the same game. Only really the one for Edun was warranted.”

You can discuss what has been said in this article HERE, as well as many other topics on our 100% Imps forum! We have also published a Lincoln City v Manchester City Quiz, which can be found below. Every page view helps raise money for Lincoln City Football Club!

Have a go at our Lincoln City v Manchester City Quiz below:

Sausthorpe Imp: “Thought everyone played well, no criticism from me. Shame about Ross’ error, but all’s well that ends well! Let’s celebrate a good win.”

hulloutpost: “It all came down to getting one decision wrong tonight. Having initially spooned the ball had Ross decided to go after it using freestyle or butterfly he would have got there easily. As it is he went for breaststroke and the rest is history.”

Norfolk Imp: “I enjoyed the game …. both sides gave good accounts of themselves, the only negative being the card happy Referee.

Only Braaf and Bernabe were 1st choice (relatively speaking) as 12 players were away on International duty at this level, but that in no way diminishes The Imps performance especially in the 2nd half.

I thought Eyoma and Roughan were outstanding, and easily the equal of their opponents taking age into account. Gotts looks a right player, and Harry …. well he is just Harry, what a season he is having”