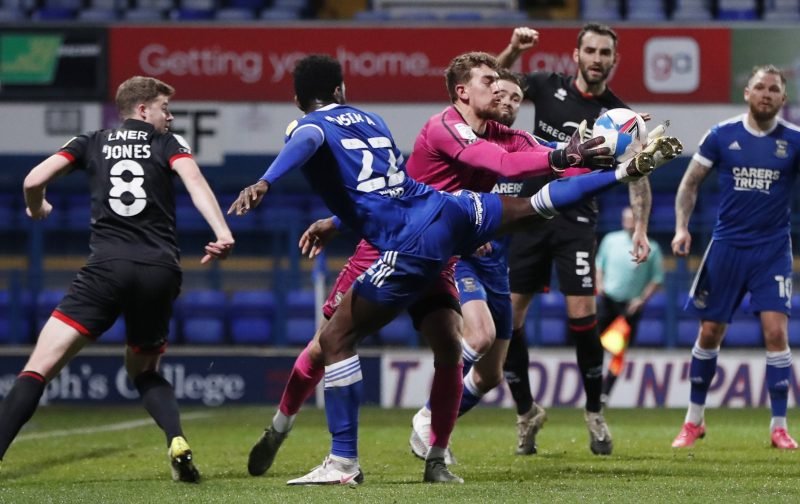 Views from Brendan Bradley following tonight’s 1-1 draw away at Ipswich Town in League One: “2 points simply thrown away due to a terrible second half gameplan.

I don’t expect gung-ho when we’re ahead but what was wrong with the first half? We looked secure at the back but dangerous when we attacked. A second goal would have finished Ipswich off.

Instead, we went to 4-5-1, forgot how to attack, and were so content on defending that nobody could even pass the ball any more.

One goal was never safe playing like that as the only times we looked in trouble were from free-kicks and corners and sure enough one did for us.

After that, we had lost all momentum having got ourselves into a totally negative mindset.

Even then there were 2 chances to win, but there was a lack of composure from both Johnson and Rogers. If Johnson had stopped he could have played Morton in for a tap-in instead of shooting from an impossible angle. And all Rogers had to do was slide the ball 5 yards to his right where Jones had an open goal.

Terrible idea to change at half time and it was costly.

The first half was excellent, exactly how we should be playing.”

You can discuss what has been said in this article HERE, as well as many other topics on our 100% Imps forum! We have also published a Lincoln City v Ipswich Town Quiz, which can be found just below. Every page view helps raise money for Lincoln City Football Club!

Did you watch the match tonight? Don’t forget to Rate The Players, Vote For Your Man of The Match, Rate The Ref and share your views on our Match Thread!

imps_joe: “Frustrating. Would have taken a point at the start but can’t help but feel it was 2 points dropped. Played too defensively 2nd half, which, without a Bridcutt type player, we can’t do effectively. Missed a couple of decent chances and ultimately got what we deserved.”

sedgleyimp: “1-1. Probably would have taken that at 7pm but does feel like a missed chance for all three. Says much for where we are and how we play that it might be considered as two points lost after an away draw at Ipswich.”

Croozey: “well, I’d have taken a point before the game. so not too disappointed. we dominated the first half, especially down the left with Bramall and Rogers combining well. Don’t know what happened in the second half as we couldn’t put 3 passes together. Over the 90 we didn’t really create many chances, but Ipswich seemed to adjust at half time to counter us. we cant expect to piss all over everyone so let’s accept that and take the point. Hull beating Peterborough was a good result for us, as we still have 2 games in hand over Hull. Posh have a few tough games coming up too. We have as good a chance as anyone.”