“In his first few appearances, we seemed to have acquired a gem.” 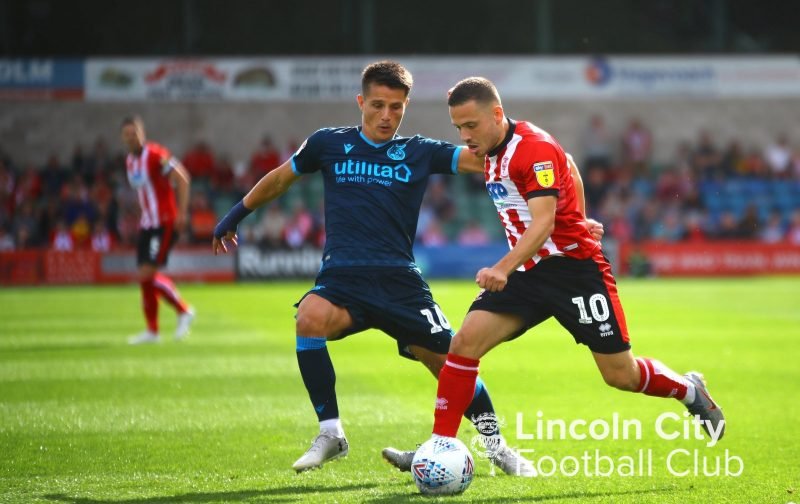 Following the announcements over the last few days that both Neal Eardley and Michael Bostwick have joined Burton Albion, it has today been announced that Jack Payne has joined Swindon Town on a free transfer. Payne made 30 appearances while with The Imps and leaves with our best wishes.

“Jack Payne was a bit of an enigma as a Lincoln player. He came to us from Huddersfield a little over a year ago and in his first few appearances, we seemed to have acquired a gem. A small bundle of tricks who had the capability to open up opposition defences with one quick pass. His pull back for Anderson’s first-minute strike against Everton and a sublime defence-splitting pass in the home game against Sunderland which led to Walker’s second goal that day showed that he could be a very good player.

The problem though was that for every decent performance, there were three or four anonymous ones. He is clearly a player who when things are going well and the whole team is firing on all cylinders he will greatly contribute. When a team has their backs against the wall and are scrapping for a hard-earned away point, he was just too much of a luxury. You look at his previous clubs and this is a pattern that has followed his career.

There is, without doubt, a skilful player there, but he wasn’t fancied by our manager and it is now for the best that he gets the chance to re-start his career at Swindon, whilst we get the chance to bring in players who our manager will play on a regular basis.

City fans will wish him the best and wonder whether we’ve let another go on to better things such as the likes of Jon Nolan and Sam Clucas or whether he’s found his level such as the likes of Maguire-Drew. It’s an important move for him as chances for him will become fewer and fewer from here on in”

Most of the really great players have some trait out of the ordinary, which makes them special. Being extremely small is not often one of them but can be. The only time I saw Paul Scholes in his playing career, he was a substitute in a not very important Champions League group game and as he jogged by warming up, I could n’t believe how small he was.

Being that size, no doubt helped him get the ball under control and manipulate it with ease, aided by such a low centre of gravity.

When Payne first arrived at Sincil Bank there were hints of a League One Scholes as we thrashed Southend. However, being small in a physical game means you have to be pretty exceptional.

Scholes had a brilliant vision and a vast array of passing options and a deadly accurate shot. He always knew what he was going to do with the ball before it was even in his possession.

Now a League One player does not need all of the talents Scholes had, but when his manager had a choice Payne or Hesketh… he invariably chose Hesketh.

Well, while Payne occasionally picked the right option, it seemed more by chance than design. In contrast, the less popular Hesketh more often saw and played the first time ball to the benefit of his colleague, when you suspected Payne would be having his sixth touch and embarking on a mazy dribble to nowhere.”

JT_LCFC: “Similar story with his last two clubs, looks a world-beater, to begin with, but the wheels quickly fall off. Useful, but no end product. Especially for the money he was on.”

Dale1981: “I thought Payne was one of our more dynamic, creative and skilful players when he played. Always looked like he could create something, given the chance. Would have liked him to stay. Taking into account his reported high wage, the new manager, new model and new system, perhaps it would be a wasted wage? I hope he does well for Swinton but we’ll do fine without him.”

"In his first few appearances, we seemed to have acquired a gem.":https://t.co/W6WdYCmEsZ#ImpsAsOne #STFC pic.twitter.com/afI2bL5VPH

"In his first few appearances, we seemed to have acquired a gem.":https://lincoln.vitalfootball.co.uk/in-his-first-few-appearances-we-seemed-to-have-acquired-a-gem/