“I just remember it being ridiculous and amazing.” 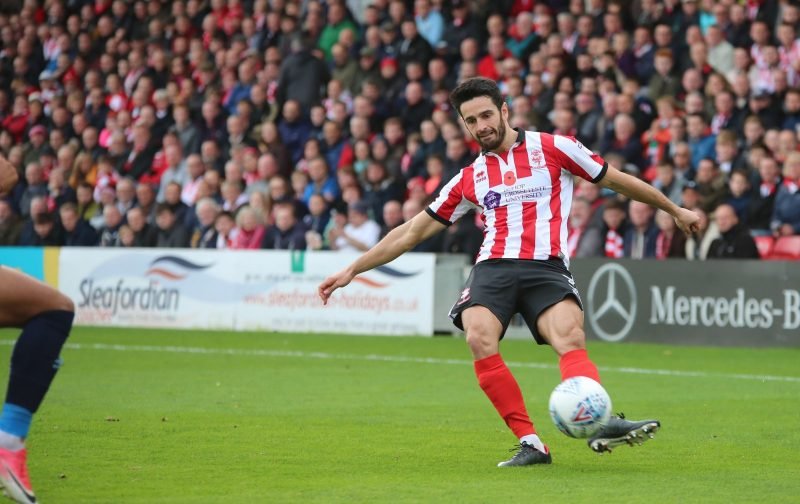 We don’t know when we will be watching live football again and it seems a very long time since we played Burton Albion, so we have to do what we can to keep things ticking over on 100% Imps and the Front Page. We’ll be doing Q&As with our members and anyone else that would like to take part over the next few weeks. So, if you’d like to put yourself on the spot, please email lincoln@vitalfootball.co.uk.

First up, the answers provided by Rob the Imp:

I would have to say in 2016/2017 when Sam Habergham scored from near the halfway line against Sutton United, I just remember it being ridiculous and amazing and jumping about like an idiot afterwards! I still like to believe that it was on purpose.

Which Imp are you robbing and why?

So many worthy of it, but it would have to be Gary Mills. What a useless lump he was. Not sure I ever saw him so much as make a tackle, he just spent all his time shouting and pointing! So, he probably deserves it.

When was your first match watching the Imps?

What stand are you in at Sincil Bank and why there?

I’m in the Co-op Stand (Lower 3), always used to sit around Upper 3 or 4 when I could when we were crap! Lower 3 now as that was the only place I could get my season ticket.

Do you go to away matches much?

When I can, although it’s not as often as I’d like. Only made it to Burton and Coventry (Birmingham!) away so far this season.

Is that really you in your photo or do you do like the rest of us do and post a far more handsome shot for your avatar?

It really is me! That was taken during/after the Arsenal game in the only Venetian pub I could find showing the game in my ill-timed holiday.

If you could go back and watch a Lincoln City match that you have attended again, which would it be and why?

I’d say the home 3-2 win over Grimsby in 2014. Even though Sincil Bank was only half full, it was a damn sight more full than for ages before that and there was so much passion (from both sides). And of course to win, especially given our recent record at the time against them to win just meant so much.

Where do you sit/stand for home games?

Which school did you go to and when?

Primary school was Brant Broughton CofE/Methodist Primary School (can’t be many dual religion ones out there?) 1993-99 and Sir William Robertson High School 1999-2004.

Which Imps player makes you roll your eyes every time you hear his name?

Bit of an obscure one, but Craig Hobson who we had on loan for a bit Stockport in 2013. Supposedly one of their better players, yet they were happy to loan him to us in the same league and of course, he was useless, just felt like a real low point when our hopes were pinned on a no-hoper. Bad times! (and perhaps a little harsh to have picked a loanee rather than a signed-up Imp who was crap, of which there are too many to name!)

Have you ever supported another Club and who? Or are the Imps your one and only?

Nope, never had another club. It did take me a while to pick up on the Imps properly though – as a kid, I wasn’t interested in supporting anyone, although I loved football. It wasn’t until about 1998 that I really started being properly interested, and that was from reading the sports part of the Echo at home! It grew from there and now I’m obsessed!

Disregarding local and local-ish rivals past and present (Grimsby Town, Scunthorpe United, Boston United, Hull City, Peterborough United, Mansfield Town and Notts County) which teams do you dislike and why?

Certainly Welling because they always seemed to bloody beat us! Forest Green Rovers just for the two ****heads in charge, and a win over them feels so much better than a normal win doesn’t it? As daft as it is, I’ve been annoyed with Barnet too ever since we switched places and went down in 2011, even though it was our fault. Still hurts!

Which is your favourite crest out of these?

It would have to be the 1994-1999 one, nice and simple, does what it needs to. Never really liked the one 2001-2014 one even though it has been the crest in use for the majority of my time supporting the Imps. I have to say that although I disliked the current crest when it was unveiled, I’ve come to really like it and it comes a close second (although once you see the too-perfect left horn that was drawn in, you can never unsee it! [Sorry!])

"I just remember it being ridiculous and amazing.":https://lincoln.vitalfootball.co.uk/i-just-remember-it-being-ridiculous-and-amazing/