“His best attribute is not being Steve Evans.” 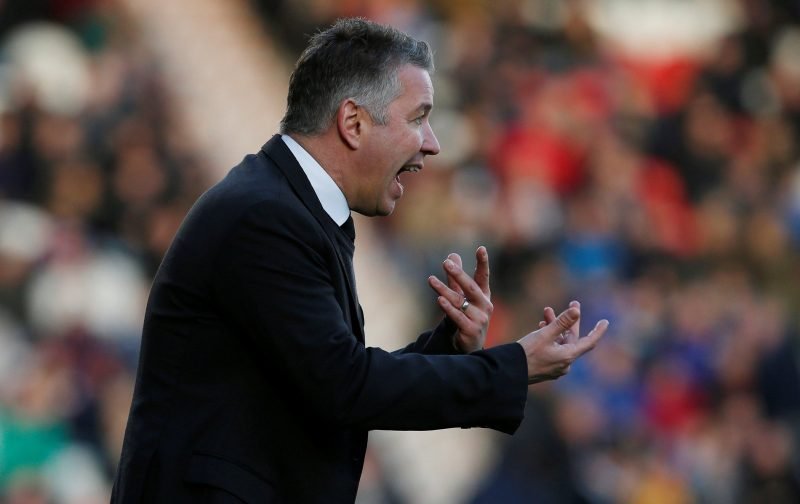 On Saturday, 20th October 2007 the two sides met at Sincil Bank in front of 5,036. This match finished 1-1, with Ben Wright putting The Imps ahead in the 45th minute before Gary Croft scored an own goal with just one minute of normal time to go.

Time for the Q&AS! Thank you to Peterborough United supporters Richard, Chompy and Stuart for answering our questions. The answers have been published on three pages. To get to the second and third sets of answers, simply click “click here for the next set of answers!/Next Page” at the bottom right of the page, or click the names above!

First up, the answers provided by Richard:

He’s a legend here, for his three promotions in his previous spells. He’s not without his faults, but he plays the football we want to see: attacking with plenty of goals. Although not all at the right end. And of course, his best attribute is not being Steve Evans.

Our front three: Ivan Toney, Mo Eisa and Marcus Maddison. 23 league goals from them so far.

Proper club! Some good results this season. Known for being a bit long ball, but it’ll be interesting to see what happens under new management.

Jack Payne has looked good against us in the past and some fans hoped we’d go after him in the summer. Although, if your keeper’s any good, we’ll have him, please!

What are your proudest and most embarrassing moments as a Peterborough United Supporter?

Most embarrassing: appointing Steve Evans as our manager.

Frazer Blake-Tracy, our left-back. A few eyebrows were raised when he was signed in the summer from the mighty Kings Lynn Town, but despite stepping up four divisions, he looks the business.

Yes, we do. They do some community and charity work and had some involvement in the recent purchase of the ground from the City Council.

Huddersfield away, playoff semi-final, second leg, 1992. We were huge underdogs but came back from a goal down and got a late winner to send us to Wembley for the first time. I can’t remember ever celebrating so deliriously. The final wasn’t bad either.

Palace away, 2013 final day of the season. We threw away a lead and lost 3-2 to get relegated on a ridiculous 54 points, while Barnsley and Huddersfield sat down on the pitch to play out a draw to save themselves and seal our fate.

It’s painful to even talk about, and 6 years later, as a club, we’ve not really recovered from it.

I don’t think so, but players from the past are often welcomed onto the pitch before matches, so that’s always nice.

What’s the best thing about Peterborough?

Well, I don’t want to start a cathedral-off against you lot, so I’ll say Ferry Meadows Country Park and the Nene Valley steam railway. Oh, and, errr London Road.

Do you consider a match against Lincoln as a ‘Derby’ match or not?

Not really, do you?

Shall we make it one, though? I mean, our proper rivals are Cambridge United / Northampton Town (there’s an appropriate acronym) and yours are presumably Grimsby and Scunny, so we’re both a bit lacking in this division.

I recall some decent games against you in the 90s. Remember that 5-1 at our place? I do!

Why is your nickname the Posh?

Before we became Peterborough United, we were Peterborough and Fletton. The manager in the 1920s said he was looking for posh new players for a posh new team, and it just kind of stuck.

Alex Woodyard, is he all that?

No! Do you want him back? We had high hopes for him when we signed him, and he was just…. really disappointing. Takes him four touches to control the ball. After a season of not being good enough, he’s finally been told he’s not good enough and no longer wanted.

However, in true Posh style, and because of our worrying lack of midfield depth, he’s been brought in from the cold. He’s made a couple of sub appearances lately, so don’t be surprised to see him amble around for the last ten minutes on Saturday.

What’re your thoughts on Barry Fry?

Why do you think you seem to be able to get out of League One but not stay in the Championship?

We haven’t got out of League One for a good few years now! I guess in terms of size, finances, ground, etc. we’re a League One club who have occasionally punched above our weight. However, with new co-owners and talk of a new stadium, maybe that’ll change. Like all football fans, we live in hope.