“He’s been at the club for nearly a year now as assistant and caretaker manager and has helped improve our fortunes.” 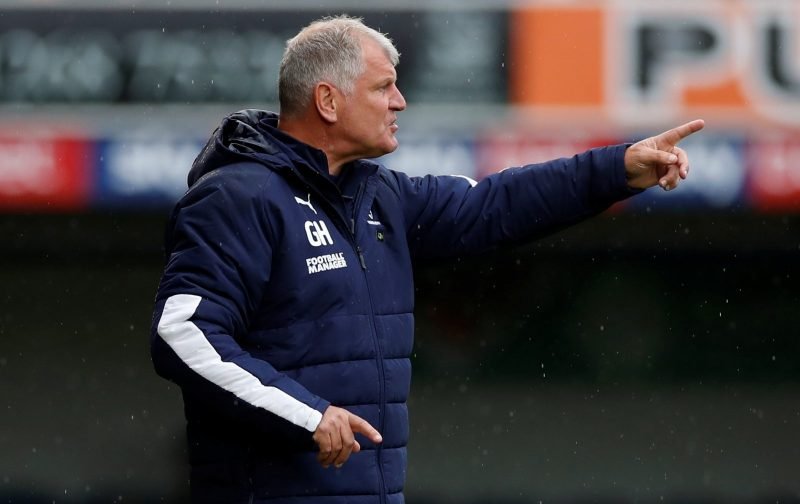 The Imps have only met tomorrow’s opponents AFC Wimbledon once since they re-formed in May 2002. This meeting was at the Cherry Red Records Stadium on Saturday 4th November 2017 in the First Round of The Emirates FA Cup in front of a crowd of 3,394. The match finished 1-0 to the host’s thanks to a goal scored by Lyle Taylor in the 7th minute.

From what I remember, it was a pretty dull match, unlike the match I attended the following day at The Valley, between Charlton Athletic and Truro City, which was a very entertaining match with the hosts winning 3-1.

Anyway, time for the Q&A. Thank you to AFC Wimbledon supporter Mark for answering our questions!

Just above the relegation zone.

This is Glyn’s first game as permanent manager, but he’s been at the club for nearly a year now as assistant and caretaker manager and has helped improve our fortunes. Plus, he was a Wimbledon playing legend who gave me one of his socks when I was a kid.

I hope we win the league and I expect us to avoid relegation.

Have done well getting back into the league and flourished under the Cowley brothers. Will be interesting to see how you get on now they have followed the money!

As a qualified referee and an assistant referee, I officiated AFC Wimbledon 8 times when they played in the Combined Counties League through to the Conference.

John Akinde as we’ve tried to sign him before, and we need a big guy up front.

What are your proudest and most embarrassing moments as an AFC Wimbledon Supporter?

The proudest was winning the FA Cup and going from the Combined Counties League to League 2 in 9 years!

The most embarrassing was The FA’s decision to move our club to that place up the M1.

Paul Osew. A breaking talent who will do well.

Yes, we do and we own the club and are involved in many decisions made.

Beating Luton Town in the Conference Play-Off Final or beating Liverpool in the FA Cup Final.

Any game against Franchise.

Yes, former players and managers are at the club most games and are very sociable with the fans.

What’s the best thing about Wimbledon?

The new stadium currently being built in Plough Lane, Wimbledon!

Milton Keynes. As supporters of a now successful phoenix club is the ‘rivalry’ between the two clubs a real thing or just something the media play on?

Do you think there can ever be a scenario where Wimbledon fans ‘let bygones be bygones’ with MK Dons? (Would them losing the ‘Dons’ from their name be enough? Or maybe when the majority of their fanbase has only ever known MK Dons to be in existence (i.e. fans born from 2004 onwards)?)

Sorry, who are they? Never heard of them.

You’ve had a few, but who would you say is your ultimate cult hero player and why?

Vinnie Jones from the old days and Adebayo Akinfenwa from the AFC Wimbledon modern days.

Have you received an unexpected favour seeing the back of Wally Downes, given some of his unsavoury comments in the past (and the poor start to the season).

No, it’s not nice to see any former player forced to leave. He did well and if it wasn’t for him, we would be playing in League Two this season.

Do older fans ever wish you’d never been promoted to the old Division One/Premier League in the first place; or did an amazing 14 years in the top flight and an FA Cup win make anything that followed worthwhile?

God no I loved it and those that I know who also went loved it. I wouldn’t change our history other than that stupid FA decision.

Sadly, collateral damage. My understanding was they were being managed poorly financially and were going to fold.

With the new ground in the offing, how far could you go in the football pyramid and how far would you wish to go?

One step at a time. Get League One stability then promotion to the Championship, regroup and go for the Premier League. We could do it again as long as we are sensible and smart.

Do you consider the real Wimbledon ended when the team had to share at Palace (1991?) or the Milton Keynes departure (2003?)

Were the Cowley’s ever mentioned when they were youth team players with you?

Work is progressing on your new ground at Plough Lane, due to be completed (hopefully) for the start of next season. How excited are you about it, and getting back to Wimbledon? What do you think of the design?

Can’t wait to go back home. I’m looking forward to it and invested my £500 to get my late father’s name on the steps and someone I dislike, name on a urinal!

"He's been at the club for nearly a year now as assistant and caretaker manager and has helped improve our fortunes."https://t.co/jyT502Kr44#AFCW #ImpsAsOne #ProudToBeImps