Gaz_Imp: “What a header by Captain Magic Hat.” 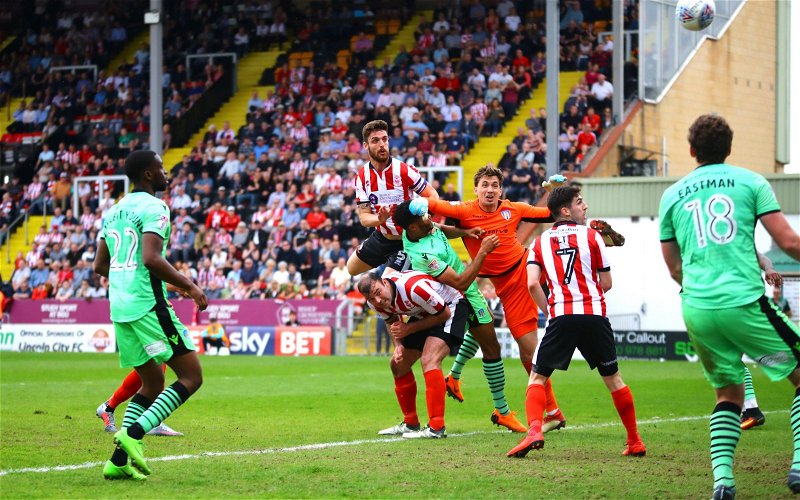 Views from Gaz_Imp after Saturday’s 2-1 win at home against Colchester United in League Two: “Not at our best today. Could argue a draw would have been fair. But we I thought we deserved to beat Wycombe, and there have been a few other games where we have drawn that we deserved to win, so about time one went the other way.

Thought Harry really wasn’t at it first half, a better winger than forward maybe. Freck struggled to get into it, certainly feels there is more to come from him. Rhead also struggled, especially compared to Tuesday when he superb, perhaps in need of a rest. The lads arguing about the pen was disappointing.

Palmer and Waterfall superb when they came on. What a header by Captain Magic Hat, he should not have been favourite to win that. Eardley, Woodyard, Wharton and Allsop also all played well.”

impsimps: “Yesterday summed up a lot about us, not the best display by a long way, but we kept going, fought and battled for everything, driven on by fantastic support and got what we deserved in the exciting end. Shades of last season again. Not so sure about the sending off, would need to see it from a different angle, looked a bit soft on the day. A few of those Rheady has to suffer every week are often much worse, more like assault.”

Let’s be honest, and this isn’t going to be popular at all – we were poor for large swathes, really poor. But you can’t doubt that we go to the death every single game, and captain Waterfall rises highest when needed. #imps

imps_joe: “Yesterday was all about the 3 points. Thought we were the slightly better team, though a draw would probably have been fair.

We didn’t play particularly well and looked very lethargic. We weren’t picking up any second balls and some of our passing was poor. The worst aspect was probably our set pieces, far too many poor deliveries. But we never stop and we always try for more and I love it!

The first thing that struck me about Colchester was how fast they were as a team and initially, it looked like it was going to be a long afternoon at the bank. However, I then quickly realised how technically poor they were, particularly shooting on goal. They didn’t create much and after we went ahead I thought we’d actually be quite comfortable. Rheady was unfortunately caught being too casual on the ball, followed by some poor defending gave them a way back in the game.

We still need to desperately improve our attacking intent. We created very little and I think we can consider ourselves a bit lucky to get that penalty. Think the ref also got the red card wrong, but, can’t see it being overturned. When we went down to 10 men I think we were actually better and looked more threatening. When waterfall smashed that header in just scenes.

Palmer was class when he came on. Personally would keep him as an impact player as he looks best in that role (and also looks knackered pretty quickly). Woodyard and Eardley continue to turn out top class performances.

No more dramatic way to end a highly successful two week trip with a winner for ten-man @LincolnCity_FC from captain @lukew30 in the 4th minute of added time. Another massive week ahead but one that I am sure will be exciting for all Imps fans. #ImpsAsOne

Gaz_Imp: "What a header by Captain Magic Hat":https://t.co/Fpuz6aw34K#ImpsAsOne #ColU #Colchester