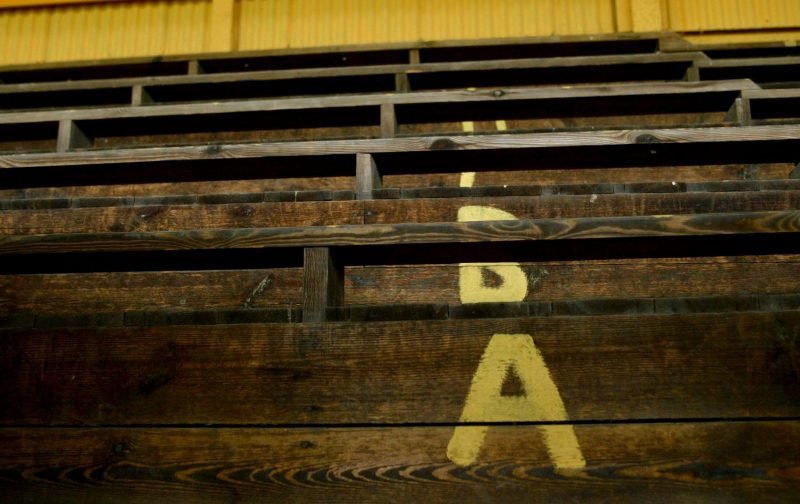 By the end of September 1987, early season anxiety had been replaced by cautious optimism. Following a disastrous start at Barnet and Weymouth, City had recovered well to sit 7th in the table, a mere 7 points behind leaders Barnet. Murphy had strengthened his squad regularly as the size of the task ahead of him became clear. Attendances were well up on the previous season, and only one goal had been conceded at home; unfortunately, it had given Kettering Town all three points as their fans sang, ‘We thought you were good, we were wrong’ from the ruins of the old South Park Stand. Not the best way to end September, but normal Sincil Bank service was resumed as struggling Bath City were sent packing to the tune of 3-0 on 3rd October. Two more goals from the ever-dangerous Mick Waitt and a first goal for the club by Phil Brown proved too good for the visitors; before the month was out, both of those players would be playing very different roles as a twist of fate perhaps altered history…

Meanwhile, an article in the Daily Telegraph focused on the sharp increase in attendances in the Conference. Lincoln were up 23%, Barnet 21%, Weymouth 137%, and an immense 156% at Macclesfield to an average of…1,249. Small numbers compared to the Conference today, but very impressive at the time.

Waitt scored yet again in an excellent 2-1 win at 6th placed Maidstone to take City to within 2 points of leaders Barnet, who were due to visit Sincil Bank a fortnight later; the excitement was building nicely. Performance of the day, however, went to Enfield striker Nicky Francis who scored all 5 of his team’s goals away at Wycombe. Excitement reached fever pitch as the FA Cup draw sent City to The Hawthorns; unfortunately, it turned out to be the home of neighbours Brigg Town in the 4th qualifying round, another timely reminder that we were non-league now. A disappointing 0-0 draw at lowly Wealdstone and a comfortable 4-1 win over Brigg in the Cup set us up nicely for the visit of Barnet on Wednesday 28th October. City sat in 5th place, four points behind Barnet in 2nd place (Kettering were top by a point). A win would move us to within a point of our main rivals; a defeat would take them 7 points ahead, which could possibly spell the end of our championship bid. Barnet had not lost away from home in more than a year. Eagerly anticipated by fans of both teams, no one could have foreseen how this match would turn out.

Footballers apparently have long memories, and clearly neither side had forgotten the ill-temper that had marred the season’s opener at Underhill. John Margerrison, injured in that match, still had not returned to action. To say that both sides got stuck in would be an understatement. The crowd of 4,624 were just as involved as the players; the majority exploded into life as captain Trevor Matthewson deflected a John McGinley free-kick past Steve Humphries for the opener. City led 1-0 at half-time; it had been a testy affair, but the tinder box was fully lit as John McGinley’s thunderous penalty put City 2 up. Noel Ashford, signed from Wycombe for £20,000, immediately demonstrated the inaccuracy of his ‘most complete player in non-league football’ tag by punching Bob Cumming; referee Trevor West, one of the very best in the game at the time, had no hesitation in sending the Barnet man for an early bath. Barnet boss Barry Fry reacted by sending on giant substitute Herbie Smith; Smith reacted by getting sent off within seconds following a foul on Clive Evans. Fry reacted by running on to the pitch to remonstrate with referee West; referee West reacted by having seven policemen escort Fry back to his place on the touchline. Barnet two down and down to nine men; suddenly they started to play City off the pitch and pulled a goal back. The final whistle blew not a moment too soon and Barnet were beaten away from home for the first time in 24 matches. The championship race was on:

City celebrated the Barnet win by destroying Cheltenham Town 5-1 at Sincil Bank. The game will be remembered for a brilliant individual goal by the inspirational Bob Cumming. Unfortunately, it will also be remembered as the game that practically ended the career of Mick Waitt. Stretching innocuously for the ball in the penalty area, Waitt broke his leg in two places; it was a bad break, and City’s danger man was out for the season. In truth, he was to miss the next 2 years, and made just 7 more appearances before eventually retiring from the professional game. A real shame; we will never know how many he might have scored that season, although 30 was not an unreasonable assumption. However, manager of the month for October Colin Murphy reacted by pushing diminuitive Phil Brown up front, and the rest is history.

In the aftermath of the Barnet debacle, an article by journalist Paul Newman entitled, ‘A cloud over the friendly league’ appeared in The Times on 6 November. It cited the investigation undertaken by Lincolnshire Police into ‘the example set by players and one official’, but stated that no criminal proceedings were to follow. But the Conference as a friendly competition had gone forever; perhaps that Barnet match was the one that gave us the Conference we have today.

November brought mixed results. A great 2-1 FA Cup giant-killing of David Platt’s Crewe Alexandra saw the new St Andrews Stand used for the first time, and City had a 4-sided ground once more. Wycombe were beaten 2-1 at Loakes Park; Murphy was so impressed by one of Wycombe’s midfielders that he signed him two weeks later for £20,000: the classy Graham Bressington would go on to thrill City fans before a serious knee injury in 1991 effectively ended a promising career. City were tormented by another opposing player on 21 November, as a long-haired winger playing for Weymouth repeatedly ran away with the ball, earning his side a 0-0 draw: the outstanding Steve Claridge. Bressington made his debut in a 3-0 win at home to Macclesfield, but the month ended badly with a 4-1 thumping at Sutton United, a crude reminder that City were not the finished article by far. The table at the end of November read:

If November had been relatively uneventful, December was filled with late drama. City exited the FA Cup at neighbours Mansfield, losing 4-3 to a last-gasp winner from Keith Cassells in front of 5,671. A spirited team performance and a brilliant Beckham-esque free-kick by David Clarke deserved better, but the two FA Cup matches against Football League opposition had showed that there was nothing non-league about the way City were playing. In the next match against lowly Northwich Victoria at Sincil Bank, City had led 2-1 until a late rally brought a last-minute equaliser. Bob Cumming had other ideas and brought the ball straight up the pitch, slipped the ball to Phil Brown, who fired past Dave Ryan in the Vics goal to secure all three points. How important was that goal to prove? Unbelievably it happened again in the very next game, the Boxing Day derby against Boston United at York Street. A Conference record crowd of 5,822 saw City take a late lead through an own goal, only for Doug Newton to snatch an 88th-minute point for Boston. Only, it wasn’t. Straight from the kick-off, Bob Cumming dribbled the full length of the Boston half before slipping the ball inside to Phil Brown; Brown chose his spot clinically and City had all three points again. Total mayhem on the City terrace. Murphy had his win, and also had his eye on another opposing player – a certain Paul Casey – of whom more was to follow…

City ended the year in fine style, with a superb 5-3 home win over Kidderminster Harriers in front of 4,121. Elsewhere, a Keith Alexander hat trick helped Barnet to a 6-2 win over Sutton in front of 3,813 at Underhill. So at the end of 1987, Barnet were not only keeping pace with City’s gathering momentum; they were actually pulling away:

Part 4 next week – City embark on a fantastic unbeaten run.