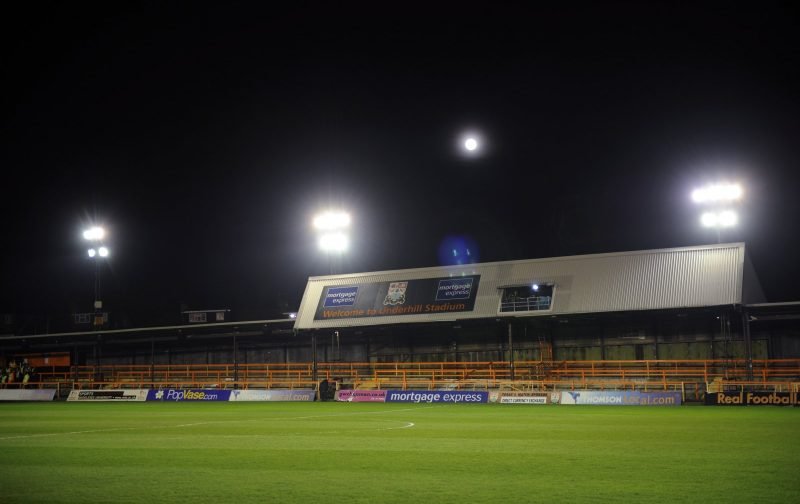 So, we are heading down the A1 to Barnet on the morning of 22 August 1987, a pleasant sunny day on which to take a huge step into the unknown. Arrival at Underhill confirms that we really are a non-league club now: the ground is small, with corrugated stands and a ridiculous sloping pitch. Lincoln’s players are warming up, dressed in incongruous white shorts; we recognise hardly any of them. The team for our first non-league match for 66 years is announced as:

Unfortunately, that was as good as it got. Barnet proceeded to dominate from then on. Tempers were frayed, as Barnet’s John Margerrison received a bad injury; Mick Waitt went in the book as John McGinley and Mark Sertori squared up to Edwin Stein. Skilful striker Nicky Evans gleefully added a third following a terrible mis-kick from the erratic Nigel Batch, while Dave Sansom completed his hat-trick late on with his second penalty of the game. The final whistle did not come soon enough: we now knew what we were up against, and it was a sombre drive home.

If any confirmation were needed, the second match of our difficult opening double-header took place on the following Wednesday evening at the Wessex Stadium, the new home of much-fancied Weymouth. Kick-off was delayed by 20 minutes as a partisan crowd of 3,583 queued around the ground to see Weymouth’s first game in their new home; and Lincoln City were the visitors, the Manchester United of the GM Vauxhall Conference. City boss Colin Murphy made one change to the side beaten at Barnet, with Bob Cumming missing the game through injury; Neil Franklin came in, with others re-shuffled. This time there was never any doubt about the likely outcome of the game, with Weymouth running out easy winners by 3-0 as local student Andy Rowland gave the City defence a torrid time. Things were made worse by a nasty back injury to defender Steve Buckley, his place taken by young substitute David Parkin; unfortunately, Buckley was to miss the next 4 months. It was immediately clear that City were not going to be good enough; a glance at the table showed:

Welcome to the Conference indeed! Was Murphy already thinking he had made a big mistake in returning to the City hotseat? Were we out of our depth, even at this level? Surely things could only get better? Surely?

History now shows that this was the lowest point the club has ever fallen to. The only way was up, starting with a home match against Dagenham on 29 August. Further changes were needed to the side, with David Mossman making his debut after joining from Stockport, the fourth player so far to follow his former manager to Lincolnshire. A much better performance saw City win 3-0, with two from new boy Mossman and an excellent solo goal from Les Hunter. Ironically it would prove to be Hunter’s third and final game as a City player; he was past his best, and clearly too slow for the Conference. The attendance of 1,995 proved to be the lowest of the season as City gained momentum.

The win over Dagenham was followed on the Monday by a narrow 1-0 success over Runcorn. Another bad-tempered affair, a solitary goal from Mick Waitt won the points after Runcorn midfielder John McMahon (brother of Liverpool & England midfielder Steve) had been carried off with a serious knee injury. City were obviously building a tough side, full of players who were committed to the cause but knew exactly how far they could go. However, we were up and running:

Murphy proceeded to build his squad further, with a Conference record £48,000 paid for Port Vale striker Paul Smith. An excellent Mick Waitt hat-trick gave us an unexpected 4-1 win at high-flying Stafford Rangers, who featured ex-England striker Gordon Hill, future City striker Mal Dunkley, and a certain Gary Simpson in their side. This win was followed by a dismal 0-0 stalemate under the candle-like floodlights at Altrincham. Yet another signing from Stockport, defender Clive Evans, made his debut in another excellent 4-0 win over Enfield, with Paul Smith getting his first two goals for the club. Smith scored again in a heavy 4-1 defeat at Runcorn, as the outstanding Mark Carter fired a quick hat-trick; to this day there are City fans who swear that Nigel Batch could not see the ball under the dreadful floodlights: a 4-1 hammering under fairy lights beside the Mersey – and there would be further setbacks before too long.

City bounced back with a 1-0 win at Telford, courtesy of a Paul Smith header, only to be followed by a dire 1-0 home defeat to Kettering Town. Fortunately, this proved to be our only home defeat of the season. The crowd of 3,156 certainly gave hope for the future and was actually cited by the Daily Telegraph as ‘spectacular’ evidence of the growth in interest in the Conference. Two steps forward, one step back, but at least we were moving forwards. Fears of another relegation were gone, crowds were significantly up, we had already played 4 of the top 6 away from home, and the top end of the table was in sight.

Table at the end of September:

Part 3 next week – Barnet come calling at the Bank and Boxing Day drama at York Street.