“Arrogant, inconsistent, rule-bound, robotic, ruinous to the game as a spectacle.” 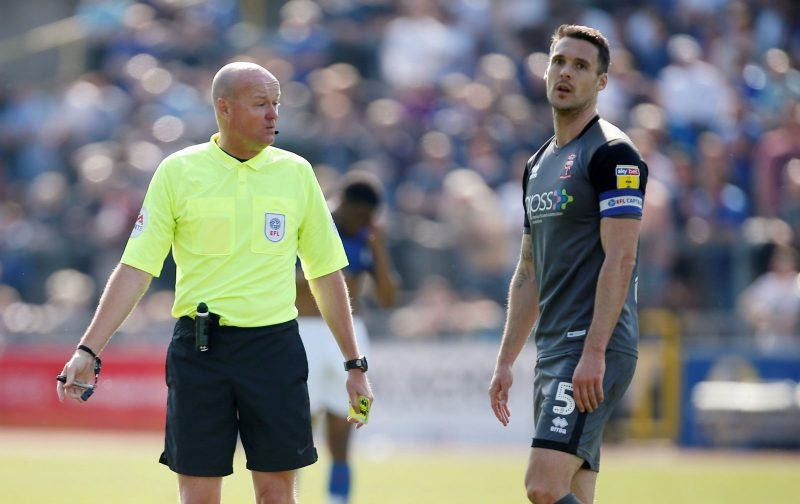 I don’t usually publish articles about referees any more, but I woke up about 20 minutes ago still feeling furious about the display I witnessed by Premier League referee Lee Mason against Carlisle United yesterday. The truth is, though, I don’t think I’ll be able to continue typing without swearing, so I’ll just leave a few views from the Vital Lincoln City members below.

Scotimp: “Oh dear, where do we begin with this Premier League plonker?

Arrogant, inconsistent, rule-bound, robotic, ruinous to the game as a spectacle.

Although Shackell should have known better, it was the softest cumulative red card I have ever seen. As Dean said to me on the way out, is there some kind of history between Mason and Shackell? He couldn’t wait to send him off and brandished the red like it was the most exciting moment of his life. And did he really have to book Bolger for coming onto the pitch before McCartan was off? Surely that situation is the job of the fourth official to manage (the equally hopeless Seb Stockbridge)? Whatever happened to having a word with a player?

In contrast, how could Thomas only get a yellow for that horrendous challenge on Bostwick? Furthermore, Anderson and Pett were repeatedly flattened all match without Mr Mason batting an eyelid. Harry could barely walk at the end of the game. Ludicrous refereeing.

This idiot is the absolute embodiment of how effectively FIFA has ruined football by having too many rules and turning referees into card-waving Daleks. If this is a top referee, God help football.

Rasenimp: “He was awful. Overly officious and a walking rule book without any element of common sense. Some of his ‘advantages’ were laughable, I can only assume he knows the rules very well but not football based on some of them and where he felt advantages started/ended, or where a team would want or not want a free kick.

I feel like we got very little in the way or 50/50 decisions and Pett must have been fouled 5+ times without getting close to a yellow against?

Unfortunately, though, I think he got the red right. Really poor from Shackell who was not his usual self.

hulloutpost: “Just seen the highlights. The only thing missing from Mason’s body posture at the sending off was the cupping of a hand to his top lip. No wonder Danny called him arrogant.”

You can view more views about Lee Mason, as well as yesterday’s match, on 100% Imps!

Who was your Man of The Match v Carlisle United? Vote and comment HERE!