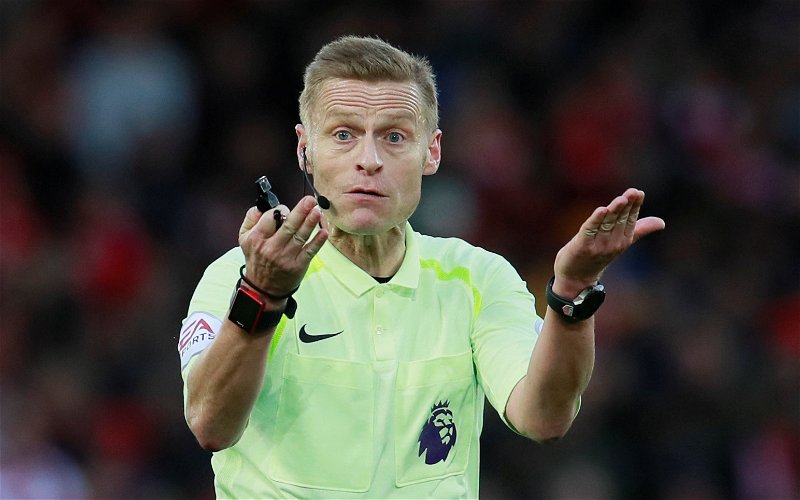 How did the referees do against Carlisle United, Port Vale, Wycombe Wanderers, Colchester United, Coventry City and Accrington Stanley?

Thought he had a reasonable game, whether he should have given it in the first place or not, took some guts to overturn the penalty, though he could have done more to stop Allsop’s time wasting, he may have added 6 minutes but a few words should have been said at least. Did well to ignore a bit of play-acting from both teams.”

hulloutpost: “After 20 minutes I’d decided he was a homer after the game he was an awayer. Never really had control of the game and the penalty cock-up (thankfully the lino put him right) just about summed his performance up. Not good for either side but less damaging to our cause 3/10.”

PerthImp: “4/10 – very oddly handled game. Felt that quite often he gave us more than we normally get from refs. Was relieved when he changed his mind about the penalty decision – had the sense to check with the lino who, thankfully, put him straight. Can understand the anger of some of the Carlisle players, but at the end of the day both teams were trying it on so he didn’t do too badly I guess.”

Jamesimp: “I don’t think he did a lot wrong, played a good advantage then went back and yellowed the offender later when Rowe was pulled back. Thought there was a bit of shirt pulling on Rheady, but whats new?

evenstephen: “5 – Was a bit too whistle happy at times but seemed to let some heavy challenges by the home team go. Didn’t get fooled by Pope’s fall in the first half but should have booked him instead of just telling him to get up. Seemed to allow the home side to time waste but got the bookings right. Didn’t penalise Rhead’s marker for trying to swap shirts during the match and we had one decent penalty shout which he missed.”

berksimps: “Above average for the away games we have had this season. 7/10.

Played advantage quite a few times, Rhead was unlikely to get any favours at Port Vale, and the ref was applauded after stopping play to book Rowe’s aggressor. Thought they wasted far less time than we do in similar circumstances; so the ref did not have to check why their keeper collapsed, or indeed hurry them at throw-ins. A reasonable performance.”

PerthImp: “Very difficult game to ref but needed to be stronger – allowed Wycombe to get away with far too much time-wasting & play acting. Seemed to be quite a few decisions on FKs that went the opposite way than I expected from what I saw. 3/10.”

lindumimp: “Shame he didn’t crack down on the time wasting right from the start. That was awful to watch. I paid to watch 90 minutes of football not 40! Very poor and completely “played” by Wycombe. Would I have Ainsworth as a manager back here? No chance.

hulloutpost: “I don’t have a problem with Wycombe time wasting at all as that is their prerogative. I do have an issue with a weak ineffectual referee who was completely passive to what was going on and it was his fault that the game was ruined as a spectacle as he could and should have stopped it; reducing it to manageable levels. His decision making on the big incidents was questionable and he quite frankly had no control because he failed to impose himself early on. 2/10.”